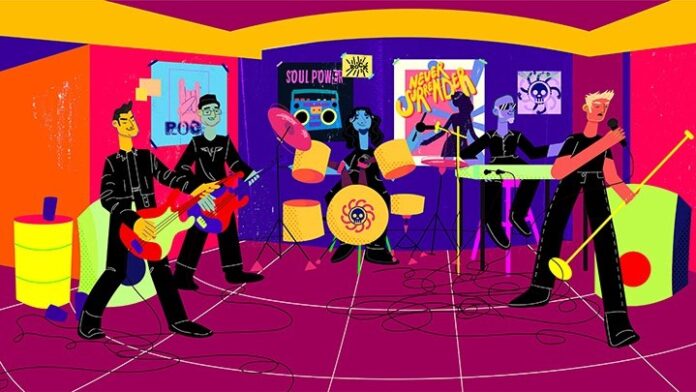 As the first Canadian artists to release a single and video via NFT, classic rockers Blu Bones cinch the next chapter in their legacy and conquer cryptocurrency, available here.

Recently reunited after more than 25 years, Blu Bones minted a unique non-fungible token for their single, “She’s Got a Way with Love.” Currently on auction via Rariable — the digital marketplace for creator-based NFTs — Blu Bones’ token includes the full mp4 of the animated song and video.

“My 20-year-old has been piquing my interest in Dogecoin recently,” frontman Gord Prior says. “I bought some, and have been following it closely. When you have your son, and Gene Simmons, and Elon Musk talking about the same thing, I figured it was worth paying attention to.”

Online activity has steered much of Blu Bones’ activity as of late; the song of note first came to be when Prior decided “it was time to address the endless emails and social media tags we received from fans ‘begging’ for us to either get back together, or record something new,” he shares.

“Most of us never thought of reuniting or doing anything new musically after all of these years,” Prior admits. “But, because of social media over the past decade, we received so many messages from fans and friends all over the world we never knew we had. They’ve wanted something new for a long time now, and this song — and this moment — just felt right. The timing was perfect for everyone.”

While delivery via cryptocurrency and NFT may be a far cry from the ever-lagging dial-up Internet that slowly picked up speed during Blu Bones’ previous hoorah, the track itself is heavily reminiscent of the legacy act’s classic sound. Mixed and recorded by the legendary Matty Green (Dua Lipa, Ed Sheeran, Coldplay, Paul McCartney) at Studio 55 in Los Angeles, California, “She’s Got a Way with Love” features Blu Bones members: Gord Prior, Boris Novosel, Barry Donaghy, Steve Thomas, and Ray Coburn.

“She’s Got a Way with Love” is available now.