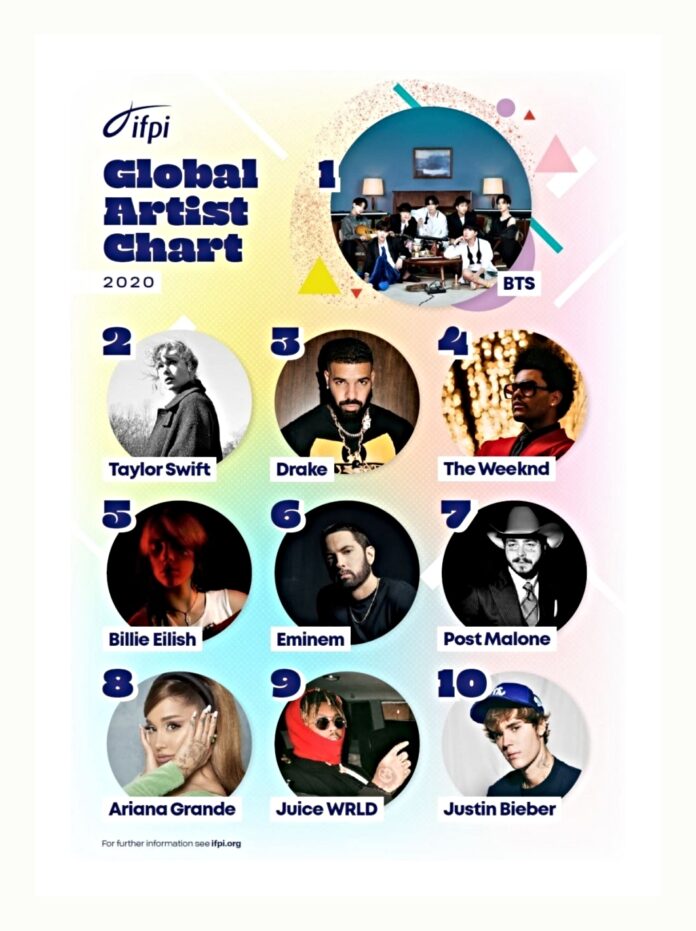 IFPI, the organisation that represents the recorded music industry worldwide, has announced that BTS’ MAP OF THE SOUL : 7 is the winner of 2020’s IFPI Global Album Sales Chart. The chart combines global sales of physical and digital album downloads to rank the top albums of the year.

VIDEOS BELOW
This marks the third Global Chart Award given to the band by IFPI, following their success as Global Recording Artists of 2020, and MAP OF THE SOUL : 7 topping the newly introduced IFPI Global Album All Format Chart.

The fourth studio album from global superstars BTS, MAP OF THE SOUL: 7 saw incredible sales all over the world and broke the all-time sales record in the band’s home country of Korea.

BTS also feature at #2 in the chart with BE (Deluxe Edition) and at #8 with MAP OF THE SOUL : 7 ~ THE JOURNEY ~, bringing their total number of appearances across IFPI’s Global Charts to six.

Elsewhere in the chart, the prominence of Asian acts continues. Japanese artist Kenshi Yonezu charts at #3 with STRAY SHEEP and BLACKPINK sits at #5 with THE ALBUM. Winners of last year’s award ARASHI sit at #9 with This is Arashi, and Japanese band, King Gnu, are at #10 with Ceremony.

Following up appearances in the Global Album All Format Chart are Taylor Swift with folklore (#4) and Justin Bieber’s Changes (#7). Australian rock group AC/DC also feature (#6) with their long-awaited album POWER UP.

Frances Moore, Chief Executive of IFPI, said: “BTS’ success across IFPI’s global charts – including the top two positions in this chart – is unprecedented and demonstrates the amazing global appeal of their music. We would like to congratulate the band once again on such a successful year.”