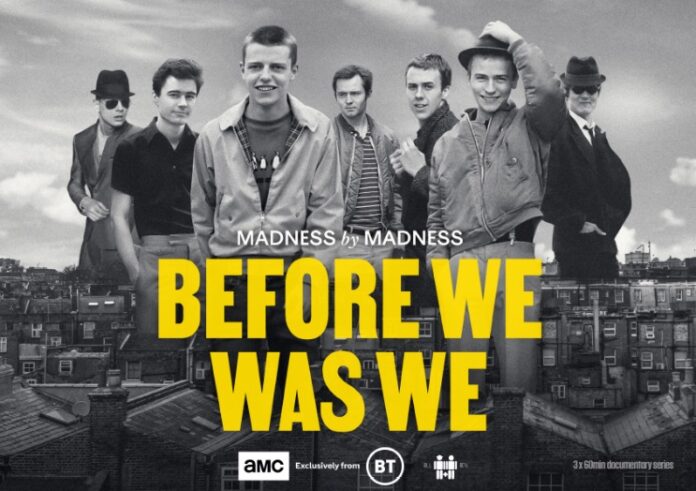 AMC UK announced today that it will premiere “Before We Was We: Madness by Madness”, a three-part original docuseries which chronicles the rise of one of the biggest and most loved bands in British culture, Madness on 1 May at 9pm, exclusively on BT TV. All three episodes of the show, which was adapted from the critically acclaimed band biography of the same name, will simultaneously be available on demand through BT Player.

Each 60-minute episode is an enthralling slice of music history, featuring original footage and interviews with band members past and present including Chris Foreman, Mike “Barso” Barson, Lee “Thommo” Thompson, Graham “Suggs” McPherson, Daniel “Woody” Woodgate, Mark “Bedders” Bedford, Carl “Chas Smash” Smyth, regaling stories from their 40-year career together as Madness. Set during a time of cultural and political upheaval, the docuseries offers a captivating insight into a post-war Britain, which has changed beyond recognition alongside the band’s inevitable rise to the top of the charts, pop fame and fortune against the backdrop of the ska, punk and new wave revolution.

The docuseries traces the humble beginnings of the band that would go on to set the record for the biggest audience ever for the BBC’s Live New Year’s Eve Broadcast – the most watched TV music event of 2018, and perform on top of Buckingham Palace as part of the Queen’s Jubilee celebrations. Throughout their career, Madness have had 10 UK top ten albums, 15 top ten singles and have won a multitude of awards including a prestigious Ivor Novello. And the story isn’t over yet.

Looking back at his career, Suggs said, “I don’t remember ever thinking about whether it was going to last. You see this polished Madness that’s been going for years and people would think, ‘course you knew.’ But I didn’t have a clue. I wasn’t taking it the slightest bit serious. That’s why I got thrown out of the band at the start, because I just thought it was a laugh and just something to do – hanging out with pretty cool geezers. The idea that I was ever going to make a career out of it was totally beyond my comprehension.”