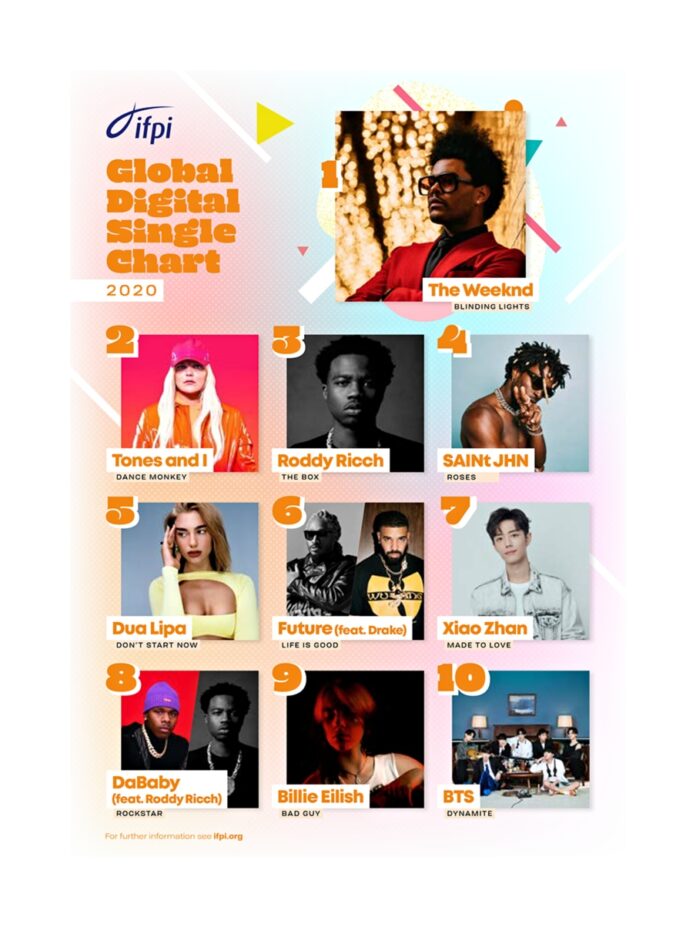 IFPI, the organisation that represents the recorded music industry worldwide, has announced that Blinding Lights by The Weeknd is the winner of 2020’s IFPI Global Digital Single Award.

The IFPI Global Digital Single Award is presented to the world’s best-selling single of the year across all digital formats – including single track downloads, and streams on both paid subscription services and ad-supported platforms.

Blinding Lights was the second single from The Weeknd’s fourth studio album After Hours, which was released in March 2020. A critical and commercial triumph, Blinding Lights peaked at #1 in more than 30 countries across the globe, fuelled a viral TikTok dance challenge, and shattered records for the most weeks in both the top 10 and top 5 of the Billboard Hot 100 in the US. Overall, the track delivered 2.72 billion subscription stream equivalents globally.

The Weeknd has appeared in the top 10 of IFPI’s Global Artist Chart in four of the last five years, and landed at #4 in this year’s chart, his best performance to date.

Frances Moore, Chief Executive of IFPI, said: “Blinding Lights was undoubtedly one of the year’s biggest record breakers and most loved songs. It caught the attention of music lovers all over the world. We would like to congratulate The Weeknd on his success, and it is an honour to award him this title.”

Blinding Lights was joined in the top three by Tones and I’s Dance Monkey, which spent a second successive year in the top ten and improved its chart position versus last year, a feat only matched by Ed Sheeran’s Perfect in 2018. Roddy Ricch’s The Box, which spent 11 weeks at #1 on the Billboard Hot 100 and topped charts across the world as well as being the top streaming track of 2020 on Apple Music, took #3 in the chart. Roddy Ricch also featured on the #8 track, ROCKSTAR with fellow chart debutant DaBaby, making him the only artist to appear twice in the top 10.

Elsewhere in the top 10, Chinese superstar Xiao Zhan landed at #7, following the outstanding success of Made to Love in his home country, where it broke records for digital download sales. BTS landed their first appearance in the IFPI Global Digital Single chart with Dynamite. Last year’s #1, Billie Eilish’s bad guy, spent a second year in the top 10 landing at #9.

The IFPI Global Digital Single Award is the second award announced by IFPI for 2020, following the announcement that BTS were the winners of 2020’s IFPI Global Recording Artist of the Year Award.