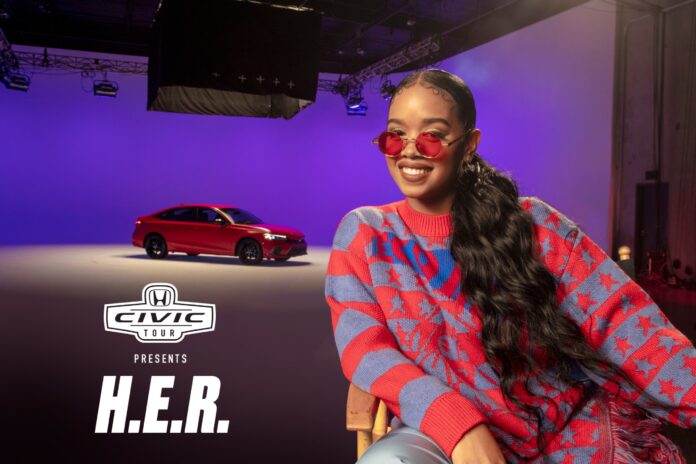 The Honda Civic Tour returns for its 20th Anniversary with a special two-stop virtual concert series, headlined by four-time Grammy Award winner, R&B singer-songwriting powerhouse and actress H.E.R. The 2021 Virtual Honda Civic Tour kicks off on April 28 at 5 p.m. PT on the Live Nation Channel on Twitch, where fans will get a special first look at the all-new 2022 Honda Civic Sedan during the livestreamed concert experience before it arrives in Honda dealerships nationwide this summer.

“I’m honored to join some of the biggest artists in the music industry in bringing my unique perspective to the stage for the Tour’s 20th anniversary,” said H.E.R. “We have created a beautiful mixed reality world for fans of the Honda Civic Tour and I look forward to sharing my music, as well as a special first look for fans of the all-new 2022 Honda Civic.”

For the Honda Civic Tour April 28 livestream on Twitch, H.E.R. has planned a mixed reality experience for fans. H.E.R.’s upcoming performance pushes the boundaries of virtual concert technology with the first-ever, live mixed reality broadcast on an XR stage. Using a combination of live-action footage, a stage created with LED panels, and the powerful Unreal game engine, the artist is seamlessly integrated into Civic Tour’s virtual environment.

Civic Tour fans will get a special first look at the all-new 2022 Honda Civic Sedan prior to H.E.R.’s virtual Civic Tour performance on April 28. The 2022 Honda Civic, on sale this summer, is the most fun-to-drive and technologically advanced Civic ever. Honda’s iconic Civic has long set the standard by which other compact cars are measured, and this new 11th-generation Civic will raise the bar in every conceivable way – style, performance, safety features and technology.

For more information on the 2022 Civic Sedan, please visit: https://hondanews.com/en-US/honda-automobiles/releases/honda-offers-first-look-at-all-new-11th-generation-civic-sedan.

Civic Tour fans can enter for a chance to win an all-new 2022 Civic Sedan, exclusive virtual meet-and-greets with H.E.R. and more. The next virtual stop of the Honda Civic Tour will feature a “Remix” version of H.E.R.’s April 28 Twitch performance, with additional details to be announced. The 2021 Honda Civic Tour Presents H.E.R. is produced by Live Nation.

Honda has a deep connection and long-standing commitment to music, including presenting two decades of Civic Tour. Since 2001, Honda Civic Tour has provided more than five million fans with exclusive interactive concert experiences and behind the scenes access to unforgettable music performances.