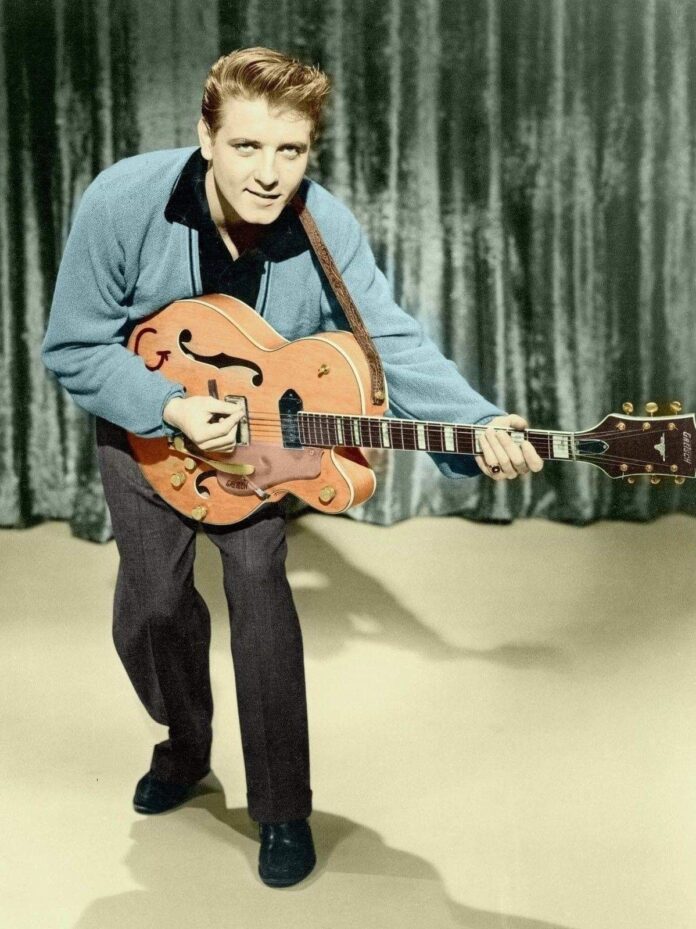 Eddie Cochran is an American rock n’ roll legend from late 1950s and early 1960s, a contemporary of Elvis Presley with a particularly strong following in the UK. His life was tragically cut short when, after performing at the Bristol Hippodrome, England, he died in a car accident near Chippenham, Wiltshire on the 17th April 1960, aged just 21.  A monument to Eddie marks the location of the crash at Rowden Hill.

The contents of ‘Eddie’s Room’ recently turned up in an abandoned storage locker in California that was sold for just $300 as it was considered junk! Now Eddie’s Room has found its way to the UK.  UK and International Rock ‘n Roll musician, Sonny West, saw bits of Eddie Cochran memorabilia appearing on ‘eBay’ and made  enquiries of the seller. Despite missing out on a few minor items, Sonny, who is one of the owners of  Killertone Records UK, purchased the remainder of the collection in order to keep it together as a tribute to Eddie.

“To find all his personal possessions, home recordings of songs never heard, unseen photos and even his clothes, was like discovering an Aladdin’s Cave,” said Sonny. “There’s a huge untold story here, from birth to death.”

Killertone Records plan to stage a travelling exhibition of ‘Eddie’s Room’ to celebrate his music and his talent, initially around the UK but eventually internationally. They aim to fund the exhibition by releasing limited amounts of  fan club memorabilia and original recordings later in the year.

Eddie Cochran’s influence on rock n’ roll is undeniable. Best known for immortal hits such as ‘Summertime Blues’, ‘C’mon Everybody’ and ‘Three Steps to Heaven’ (released posthumously), Eddie is credited with being an inspiration to many UK musicians, from John Lennon and Paul McCartney of the Beatles to Jeff Beck and Jimmy Page. Eddie’s music has been covered by numerous bands; The Who, the Sex Pistols and Bruce Springsteen to name but a few. Ahead of his time and often termed the original ‘Guitar Hero’, he was a creative song writer and music producer, experimenting with multi-track recording and over-dubbing long before others. He was one of the first to use an unwound third string on his guitar, which allowed him to ‘bend’ notes up a whole tone.

You can find out more about Eddie’s life, items to be released and the exhibition plans by signing up to Killertone Records newsletter at www.killertonerecords.co.uk

Eddie Cochran was inducted into the Rock and Roll Hall of Fame in 1987.