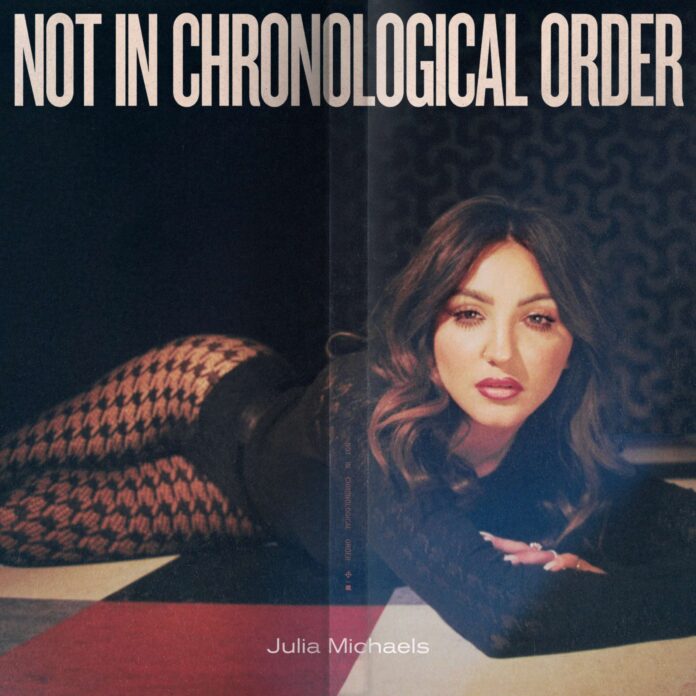 Today, Grammy Award-nominated multiplatinum singer and songwriter JULIA MICHAELS reveals the title and track listing to her long-awaited debut album, Not In Chronological Order, which arrives April 30. To accompany the announce, she shared a new song from the album, “Love Is Weird.”

Offering another glimpse into what fans can expect from the upcoming album, “Love Is Weird,” weaves together airy production and soft acoustic guitar, while she delicately likens relationships to “Playing Operation trying to put me back together,” before candidly admitting, “Love is weird. Don’t know how I wound up here…It shows up and disappears.” This honest and hypnotic melody highlights her uncanny ability to tune into raw emotion and unfiltered lyricism, with her signature vocal tone and delivery.

The new song sets the stage for the release of her anxiously awaited full-length debut album, Not In Chronological Order, out on April 30, 2021.  Presenting a full 360-degree perspective on the critically acclaimed songstress, it examines every facet of her life emotionally and spiritually in a 10-song body of work that finds Julia piecing together the chapters of her life in one place work.

“When I was looking at the tracklisting, it literally was not in chronological order of the events that it took place in my life,” she says. “The way that I saw the tracklisting in my head, a lot of the heartbreak came in the middle, and finding new love came at the end. That’s the arc of this album: I’m not bitter about love anymore. I know what functional love is like and being in love and being hesitant about that love because it feels so perfect.”

Over the past few years, no songwriter has had more of an impact on reshaping pop music than Grammy nominated and multi-platinum selling artist Julia Michaels, whose razor-sharp perspective on love, loss, and the wide spectrum of the human experience has deservedly catapulted her to the forefront of her industry. Lauded for her work on hit singles by artists like Justin Bieber, Selena Gomez, Niall Horan, Dua Lipa, Janelle Monáe, Shawn Mendes, P!NK, Ed Sheeran, Britney Spears, Gwen Stefani, Hailee Steinfeld, The Chicks, Keith Urban, Jessie Ware, and more, Julia has spent the last decade honing her craft and delivering fans some of the most evocative music of a generation.

In 2017, Julia embarked on a solo career separate from her work synthesizing the stories of the stars around her with “Issues,” her 5x-platinum selling debut single. A year later, her peers recognized her stunning work with Grammy nominations for “Best New Artist” and “Song of the Year.” Committing to her solo work, Julia released a series of critically acclaimed EPs, including 2017’s fan-favorite Nervous System and 2019’s critically acclaimed Inner Monologue Part 1 and Inner Monologue Part 2. She also embarked on The Inner Monologue Tour, which marked her first-ever headline tour throughout the U.S. following an enviable run touring the world with an incredible array of artists including Maroon 5, Keith Urban, Shawn Mendes, Niall Horan, and P!NK.

In 2020, she received her third Grammy nomination, and second in the prestigious “Song Of The Year” category, for her collaboration with JP Saxe on “If The World Was Ending,” in addition to earning her second #1 as a songwriter on the Billboard Hot 100 for Selena Gomez’ “Lose You To Love Me.”

Not In Chronological Order – Tracklist: