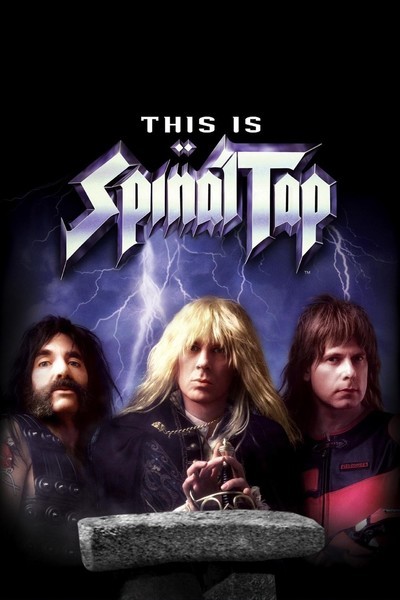 ob Reiner, Harry Shearer, Christopher Guest and Michael McKean, the creators of the iconic mockumentary, This Is Spinal Tap, are strongly encouraging anyone who is advertising upcoming public showings of the ground-breaking comedy film to secure a licensing agreement before moving ahead with their plans.

The four co-creators of the film are pleased to see positive signs in the movie world as we all begin to emerge from the Covid crisis. But drive-in cinemas or other entrepreneurs advertising showings of the film that then proceed without a licensing arrangement will be considered unauthorized, and may be subject to a legal response.

The four co-creators announced earlier this year that they established a wholly owned entity to manage the licensing of the film and all rights related to it. The four creators, Reiner, Shearer, Guest and McKean have been in sole control of the film’s rights since 1st January 2021.

New licensing arrangements, now handled exclusively by Authorized Spinal Tap LLC, apply not only to the much-beloved movie and all of its featured characters, but also to trademarks and all associated rights.

Director Rob Reiner said, “We love that audiences still have such affection for the film. Since the beginning of 2021, we have been in the process of wrapping our arms around the task of completely managing an artwork that has maintained its stature and influence over nearly four decades.”

That influence lives on, as evidenced by Time Out London once again naming This is Spinal Tap as the “Number One” comedy film ever produced, on its annual list of the “100 Best Comedy Movies” (January, 2021). Upcoming plans in the U.S. and Australia for showings at drive-ins theaters, in particular, are no surprise.

“Simply put, please don’t advertise a showing of the film without approaching us for a licensing agreement,” said Harry Shearer. “The mechanics and economics of we four creators’ managing the film’s rights demand that we have full knowledge of, and give our approval to, all future showings of This is Spinal Tap, no matter when they occur, or the size or location of the venue.

“We are making this request as the four individuals who created this iconic film,” said Michael McKean. “It’s time everyone involved was properly recognized, and we can only accomplish that by seeing to it that public showings and performances are licensed and equitably compensated.”

Christopher Guest added “There is a rich creative and management ecosystem behind This is Spinal Tap, and everything the film has come to represent for millions of fans worldwide. We are now dedicating ourselves to managing how the film is distributed worldwide, so that existing and new fans will have the opportunity to enjoy it.”

Spinal Tap band members David St. Hubbins, Nigel Tufnel and Derek Smalls were unavailable for comment, but were said to be watching developments unfold with great interest, as they plot and plan their next creative endeavors with enthusiasm and with renewed energy (given their ages).

The motion picture, This is Spinal Tap has become a cult classic since its first theatrical run 37 years ago. The film was produced independently on a shoestring budget of (US) $2.25 million, by a company owned by the four creators, Reiner, Guest, McKean and Shearer. Two years in production, the film was released in 1984. It soon became a cult favourite and spawned a genre that has come to be known as “mockumentary”, inspiring many subsequent filmmakers. Phrases from the film’s script have entered the general lexicon (including “none more black”, “it goes to 11”), the latter phrase exemplified by the Tesla car, whose audio system’s volume control goes to 11, as does that on the BBC’s iPlayer.

Its reputation as one of the 20th Century’s most enduring comedies has increased exponentially in the ensuing years. The film has garnered international praise and acclaim, having been included in “best ever” lists such as The New York Times Guide to the Best 1,000 Movies Ever Made; Total Film’s 100 Greatest Movies of All Time list; Entertainment Weekly’s 100 Greatest Movies of All Time where it appeared on the “Just Too Beloved to Ignore” list; and achieving the coveted Number One spot on Time Out London’s 100 Best Comedy Movies list in 2021. In 2002, the film’s lasting appeal led the US Library of Congress (the world’s largest cultural collection), to designate it as a culturally, historically or aesthetically significant film.

Although This Is Spinal Tap was first released in 1984 in the US and UK, the band “Spinal Tap” was actually created in the late 1970s. The band’s rock musician characters “Nigel Tufnel” and “David St. Hubbins” were created by Christopher Guest and Michael McKean with Harry Shearer creating bassist “Derek Smalls.” Spinal Tap’s comedic sole claim to fame was as “one of England’s loudest bands.” Performing as their beloved stage personae in the company of a rotating cast of percussionists willing to risk the kit (as so many of their predecessors have been accident prone), Spinal Tap has toured the world multiple times since the film’s release. Hundreds of thousands of Spinal Tap sound recordings have been sold over the ensuing decades and the film has been released on scores of video formats through the years.

In 2019, the band’s creators concluded a new agreement with Universal Music Group. The band’s recording of a full-length Spinal Tap album featuring songs from the film is still available for physical sale, download and streaming today from UMG.