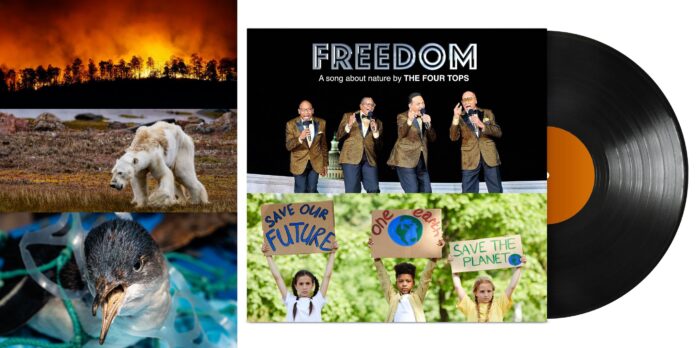 ‘FREEDOM’ is a cry from Mother Nature and the animal world to humans begging us to turn our ways around.

The song is part of an awareness campaign and supported with a harrowing music video and endorsed by world leaders, superstars, and activists around the world.

ABDUL (DUKE) FAKIR, original member of THE FOUR TOPS said ” Sometimes things need to be said” which is why he and the Tops teamed up with MC FILMS GROUP Chris Dickson, Dr. Marlin McNichols, and FLEXY RECORDS Mark Kendrick and Todd Edwards to produce this wake-up call to the world.

THE FOUR TOPS have been wowing audiences with their infectious blend of pure vocal power and sweet harmonies since 1954. Since their first hit, Baby I Need Your Loving, in 1964 they have had a string of hits including Reach Out, I’ll Be There, Standing In The Shadows Of Love, Bernadette, Walk Away Renee, I Can’t Help Myself (Sugar Pie Honey Bunch) and Loco In Acapulco amongst others and Rolling Stone ranked them #79 on its list of the 100 Greatest Artists of All Time.

The song will be launched on all platforms on the 5th of June 2021.