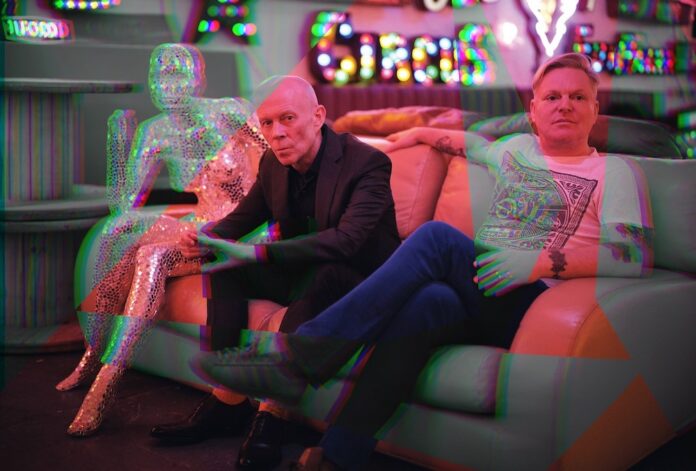 ERASURE (Andy Bell and Vince Clarke) today announce a North American tour produced by Live Nation set to launch January 14, 2022 in Miami before wrapping up in late February at The Venetian in Las Vegas. Pre-sales begin tomorrow with tickets available to the general public beginning Friday, June 25 at 12pm local time. Bag Raiders will open each date with a DJ set.

News of the North American tour follows the 2020 release of Erasure’s rapturously received eighteenth studio album, The Neon. Featuring jubilant songs such as “Nerves of Steel,” “Hey Now (Think I Got A Feeling),” and “Fallen Angel,” The Neon was met with widespread critical acclaim with critics and fans alike praising Andy and Vince’s euphoric reemergence at a time when the world needed them most.

This summer, the duo will release The Neon Remixed, a collection of reimaginings of songs from The Neon by artists such as Kim Ann Foxman, Hifi Sean, Octo Octa, Paul Humphreys (OMD), Andy Bell & Gareth Jones, Brixxtone, Theo Kottis, and more. Also included is the brand new single “Secrets.”

The Neon Remixed is set for release July 30 on limited edition (first pressing only) double colored vinyl and gatefold CD, both packaged in a mirror board sleeve. Pre-orders via MuteBank and Lexer Music will be entered into a draw to win a bespoke neon sign designed by Yellowpop.

Written and produced by Erasure, the album’s initial sessions saw Vince and Andy reunite to work on the follow up to 2017’s World Be Gone with a fresh optimism and energy, in part born from their own recent personal projects. Vince goes on to explain, “Our music is always a reflection of how we’re feeling. Andy was in a good place spiritually, and so was I – really good places in our minds. You can hear that.”

Taking inspiration from pop music through the decades, from bands Andy loved as a child through to the present day, he explains, “It was about refreshing my love – hopefully our love – of great pop. I want kids now to hear these songs! I wanted to recharge that feeling that pop can come from anyone.”

The Neon vocals were recorded in Atlanta, Georgia, with Vince joining Andy at the studio sessions, and the mixing was done by the band in London earlier this year. Photographs were shot at that time in the unique environs of Gods Own Junkyard, a gallery housing a huge collection of vintage neon. Andy enthuses, “I felt like it was being inside a virtual reality game. I loved that it felt like being in a different world. That’s what I want our new album to convey.”