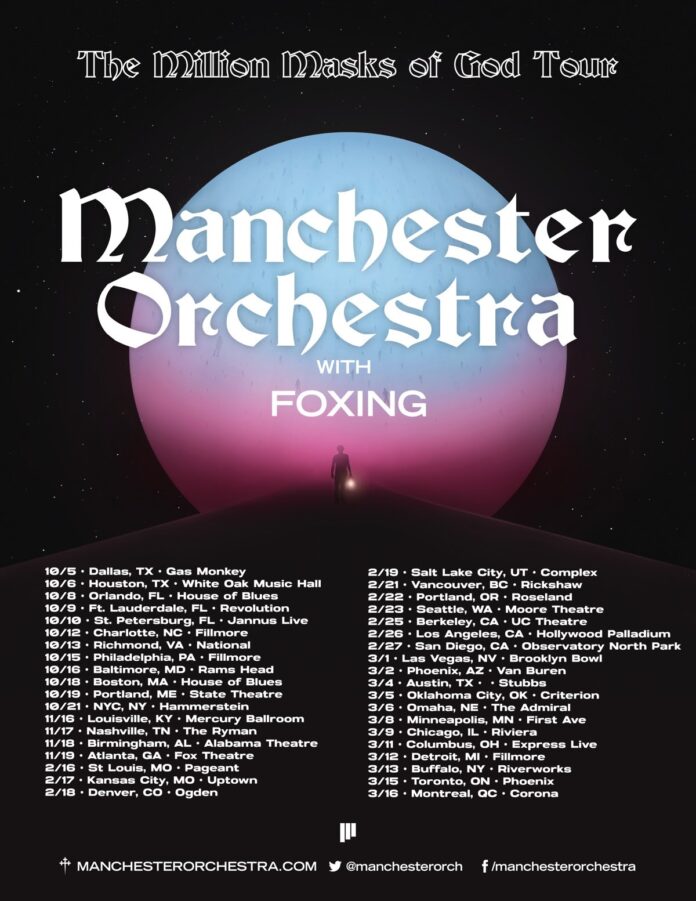 After sharing news of their first three full band shows in over a year—in some of their biggest rooms to date—Manchester Orchestra today announced they’re bringing their critically acclaimed new album, The Million Masks of God, to life with a triumphant North American tour spanning across October/November 2021 and February/March 2022. The 38-show run will take the band’s renowned live show throughout the U.S. and into Canada, and will mark the live debut of Masks, out now via Loma Vista Recordings, including the epic, AAA radio Top 3 and Alternative radio Top 20 hit, Bed Head.

“It is our absolute pleasure to announce our return to the stage across the United States. We have missed playing together in a communal setting more than we ever thought we could,” says singer/guitarist Andy Hull. “This is about to be a party. See you all soon.”

Manchester Orchestra—Hull, Robert McDowell, Tim Very, and Andy Prince—recently released the heavy, slow-burning new song, Never Ending, their contribution to the Dark Nights: Death Metal Soundtrack, executive produced by Tyler Bates (“Guardians of the Galaxy,” “Watchmen,” “John Wick”) and out digitally now. It followed the gorgeous, stripped-back Bed Head (Acoustic), a new version of their lead single; the band has also performed a blistering rendition of Bed Head for The Late Show with Stephen Colbert #PlayAtHome series, as well as three acoustic versions on CBS This Morning: Saturday Sessions. The Million Masks of God, recently named one of the Best Albums of 2021 (So Far) by Uproxx, has been earning the band career-high praise from Stereogum, NPR Music (All Songs Considered), Uproxx, SPIN, American Songwriter, and many more, in addition to guest appearances on WNYC New Sounds, Comedy Bang Bang’s 12th anniversary special, Kesha And The Creepies podcast, and Emily Kinney’s My Caffeine Withdrawal, among others.

Produced by Manchester Orchestra’s lead songwriting duo of Hull and McDowell, Catherine Marks (PJ Harvey, The Killers) and Ethan Gruska (Phoebe Bridgers), The Million Masks Of God presents an even grander scale of the epic and re-focused approach to record-making that the band has forged in recent years. Their sixth album finds the band relentlessly pushing themselves to create a work that breaks beyond the scope and limits of every previous release in an effort to create their most towering achievement to date, all while sorting through the aftermath of a devastating loss.