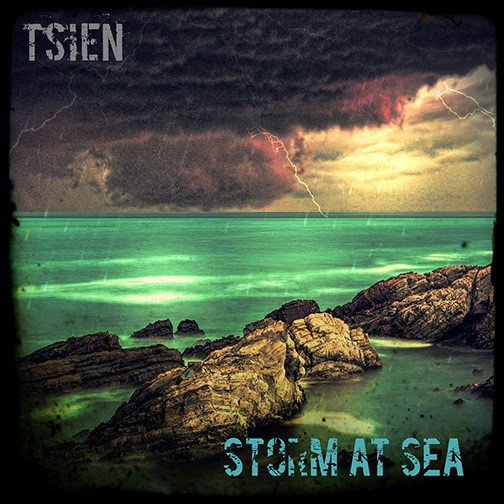 Strap in; there’s a “Storm at Sea” with experimental math-prog metal rockers Tsien and their newly released single (with its own tumultuous backstory) — available now.

A sonic soundscape hurricane that threatens to wreck you the longer you hang on for dear life, this United Kingdom-based band is no stranger to doom. And they’re providing a whole new round of it on their re-released offering of their seminal album, No Two People Are Not on Fire.

For the veteran six-piece that comprises of of Adam Strazzanti, Alex Baldwin, Tim Wilson, Sandy Strazzanti, Steve Neale, and Dave Hill, the making of No Two People Are Not On Fire was a laborious project birthed of over half a decade of songwriting between the members. Tsien would form in 2006, and remain active until 2011, but the recording of the album cultivated tension between the group, forcing them to split shortly after.

Now, with their hands on new equipment, new production techniques, and time to remaster the originals, the album is back in full throttle, ready to engage an entirely new audience with its melodic, industrial prog metal.

“We finally had the time, space, equipment and inclination to revisit them and polish them to a standard we’re happy with — considering how they were recorded in the first place,” the band explains. “So, the album has now finally been properly released a decade after it was recorded, and 15 years after some of the song’s first inceptions.”

Acknowledging songwriters Kieran Parnell, Daniel Gilks, and Matthew Atkins for their contribution to the album, No Two People Are Not On Fire is a cascading anthology of metal novellas — with each track clocking in beyond the five minute mark.

Each record is a deliciously designed paradox of instrumental enchantment, suddenly raging aggressively through strangled vocals and damned lyrics. What Tsien sets out to achieve is an absurdly hypnotizing foray into their ever-changing genre inspirations. As the band says, their “eclectic style fuses inspiration from across the whole musical spectrum; from metal, to funk, to jazz, to pure disgusting tonal noise — all condensed to make for an absurdist auditory experience.”

Their lead single off the album, “Storm At Sea” is an audio journey through dreamy vocals, heavy industrial guitar riffs, and smashing percussion. Infused with harmonic interludes featuring layered vox, Tsien invites the listener to walk through a cascading plea; the heartbreak of a toxic relationship falling apart, being unable to break free, begging for release and unable to stop the cycle.

From hushed tones of acceptance, to pulsating screams of resistance, “Storm At Sea” is as much a revelation as it is a surrender to the power of love gone peril. At nearly eight minutes, the track refuses to back down from its commitment to see through the longing, and the sadness; the acceptance and the fear of being unable to sever ties completely with a floundering former flame.

Once you’ve entered the world of Tsien, you’re imprisoned to their haunting tales of yearning and reluctance. The ride isn’t over until they say so.

Tsien, the band that had a local cult following, brought their brand of genre hopping, raw aggression to the digital realm. Recorded on a potato in a shoddy lock-up in central Birmingham with a budget of precisely nothing-at-all, treat yourself to a sonic experience like you’ve never heard before. Six microphones directly into a computer never sounded so weird.

“Storm at Sea” and No Two People Are Not On Fire are available now.