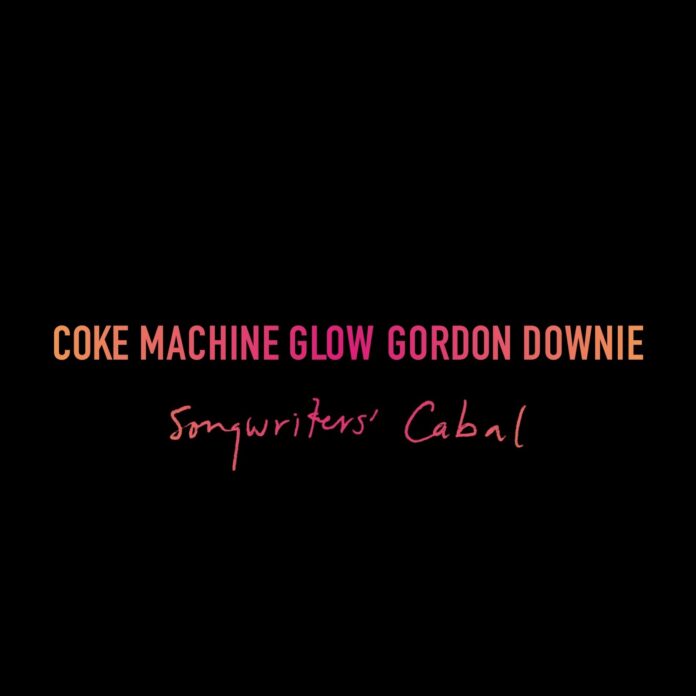 Gord Downie’s Coke Machine Glow was released in 2001, in between Music @ Work (2000) and In Violet Light (2002), the ninth and tenth albums by his mighty band of brothers in The Tragically Hip. The first solo project by one of the world’s great wordsmiths, Coke Machine Glow’s sixteen painterly songs were released with an accompanying book of poetry, collectively emanating Downie’s heartrending stories, from the road as from home, in his signature quirk and complex, approachable wit. Twenty years since its release, Coke Machine Glow remains a teetering, charming body of work, never static, shot across its canvas in brilliant glowing embers and warm honey tones.

The in-all 28-song collection presents a portrait of Downie with a rarely before heard intimacy, unrefined and dripping in the wildness of the moment. Elegant alternate studio takes of classics like “Vancouver Divorce” and “Lofty Pines” express the fluidity of the family band that comprised the Gas Station recording sessions in Toronto, that May of 2000; while home recordings dated November 1999, Carlaw Avenue, of “SF Song,” “Trick Rider,” and “Chancellor,” and more, spotlight Gord in close communion with his tape recorder and coffee machine. Produced by GD, Josh Finlayson, and Steven Drake, featuring Dale Morningstar, Julie Doiron, Kevin Hearn, Atom Egoyan, Dave Clark, Don Kerr, and more, Coke Machine Glow: Songwriters’ Cabal is a document of Gord at the precipice of his illustrious solo career.

Concurrently, Penguin Random House Canada announces the first ever Coke Machine Glow audiobook, a complete reading of Downie’s original book of poetry by family members, band members, and friends, like Sarah Harmer, Dan Aykroyd, Ron MacLean, Bruce McCulloch, Don Kerr, and many more, produced by Patrick Downie. (See here for the full list of readers.) Ultimately a book Gord wrote about the distances that bridge and separate us, Coke Machine Glow is bound by the dedication of those he loved and was loved by – a rich, haunting collection that reveals both the public and private selves of Gordon Edgar Downie. In poetry that is urban, gritty and political, romantic and nocturnal, nostalgic and whimsical, Downie allows us a glimpse inside his world, with loved ones carrying the gift of his words onwards.

Available via digital audiobook retailers, the Coke Machine Glow poetry collection will also be included on CD with A&C’s physical music editions. The Songwriters’ Cabal 3LP vinyl is presented in a beautiful embossed triple-gatefold package, limited to a one-time pressing of 2000 hand-numbered copies. In addition to the 3CD set, A&C is for the first time offering a Coke Machine Glow songbook for voice, guitar, and piano. The album, audiobook, and songbook are out on August 27, 2021. The Coke Machine Glow: Songwriters’ Cabal limited edition vinyl is expected to ship November 15, 2021.

That Coke Machine Glow did not sound like a record by The Tragically Hip was both not a surprise, and is still in every way a surprising work: Downie’s oblique yet vicarious poetry undressed of its electricity, redressed in a glorious other voltage. A snapshot of spontaneity, recorded but barely rehearsed – its arc of clandestine art pop clashing with the hum of collective stream-of-consciousness – Gord Downie’s Coke Machine Glow feels like a wild passage through listless places, burrowing in the magic of whatever delicate moment. Maybe Downie was the genius orchestrator of this Goddamned Band, or perhaps he was just always prepared with the right thing to say. You might have listened to this record for the last twenty years, and still not heard some of its finest details – that is the happenstance when onesome poetry is rightly crossed with collective improvisation. On Songwriters’ Cabal, the curtain is pulled back, as Downie rose from his kitchen table/hotel room desk, notebook in hand, and “stepped to the mic and sang, voice tinkling like a chandelier, until god or a reasonable facsimile appears.”

NOT included on either the music album or the spoken word audiobook is a bonus music edit of Rob Baker of The Tragically Hip’s reading of the poem “I Stand Before the Songwriters’ Cabal,” set to an instrumental snippet of the same titled song. Shared today, listen here:

Josh Finlayson on the Coke Machine Glow sessions (from the liner notes): “Having lived in Toronto for over 10 years, Gord wanted to make his first solo record in his adopted city,” co-producer and musician Josh Finlayson recalls. “He had met and befriended many artists in different disciplines and was keen to collaborate with that community. The Gas Station recording studio was located in an old warehouse district of Toronto close to the exhibition grounds near King and Dufferin. Located on the fourth floor, it was an open spaced room with 10 foot windows that had spectacular views looking south to Lake Ontario and east towards downtown. Owned and operated by Dale Morningstar and Don Kerr who after 10 years of operation were being evicted from this location. Coke Machine Glow ended up being the last session at the Gas Station from April 29-May 10, 2000.”

The one concrete idea we had going into the recording was that Gord would sing these songs quietly, as they had been written. The recording room was large (50’X25′) with high ceilings. The musicians were spread throughout this room facing the centre where Gord was sitting. Don Kerr (drums) and Kevin Hearn (piano) were only available for the first day of recording which was also our set up day. By late afternoon we were ready to start and their time constraints led to the decision that we were going to make a live off the floor record using an 8 track machine. In hindsight, this was a fortuitous decision as it created a structure that forced us to work within certain parameters. All the songs ended up being cut live, including Gord’s vocals. The only overdubs were done by guests who weren’t available at the time and had to add their parts later. For the remainder of the session Dave Clark took over on drums and Dale Morningstar who was assistant engineering, played several different instruments throughout the recording. There was little rehearsal time for anyone so in most cases the songs were run through once or twice and then recorded.”