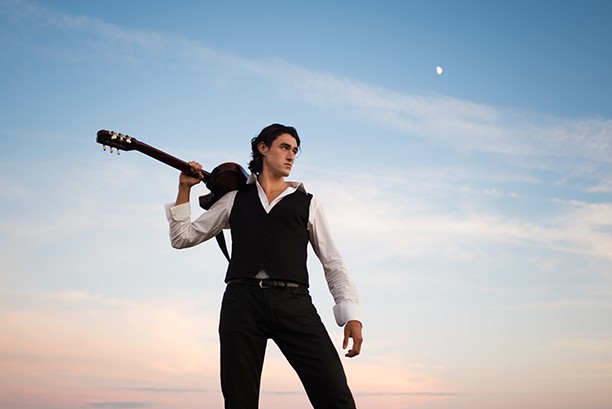 A scorching testament to his incendiary guitar technique, “Nacido del Fuego” has Grant masterfully commanding the frets as a puppeteer of a passionately penned prose on the music that moves you most. The track is featured on his debut album, Equilibrium, and is matched solely by his exquisite music video showcasing his expertise.

“Equilibrium is a purely instrumental offering and was made to showcase the stylistic contrasts of my playing and composing,” Grant says. “The record was recorded entirely on a laptop in my kitchen, and the accompanying music videos for songs ‘Nacido del Fuego’ and ‘Andalusian Nightfall’ were guerrilla filmmaking feats that involved myself and a buddy hauling the Marshall stacks to a 17-story rooftop, having our cameraman drive alongside the borrowed Mercedes on a Segway to capture the closeups while his wife spotted the road for oncoming traffic, and generally using unconventional methods to make my vision a reality with limited resources.”

Awarded the prize for Best Tonal Music at the 2017 International Antonín Dvořák Composition Competition in the Czech Republic, Grant is a world-renowned composer and performer earning a reputation for well-refined musicality and a penchant for eloquent songwriting — including the release of a recent purely classical recording, Piano Quintet.

Endorsed by Godin Guitars, the Windsor, NS-born guitar virtuoso, composer, and vocalist is predominantly influenced by Latin and Spanish-infused rock music. Grant’s relentless talent brings audiences to awestruck ovations as his mercilessly impressive Flamenco guitar talent is a breath-taking sight to witness live. Frequently incorporating orchestral elements into his music, Grant is backed by a full band and special guest vocalists when he performs.

As the endemic looms ahead for the world, Grant’s touring schedule has been reignited by his passion to perform stage after stage, night after night. In 2022, armed with his guitar, his ability to mesmerize audiences, and present his astonishing ability to enchant and ignite the stage through his compositions and multi-instrumental agility, Roland Grant is “Nacido del Fuego”.

And so is his music.