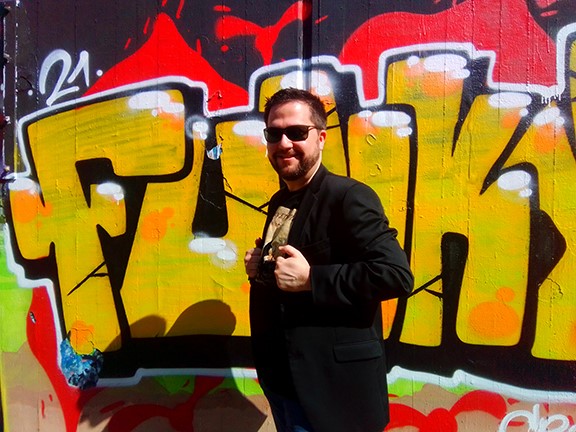 Paying homage to the power of support during times of struggle, Jochen “Joe” Kinzig and his rock outfit Joe’s Groove Huddle release a new single, “Strong.”

“The song is about the support important persons can give in phases of setbacks or hard knocks,” explains Kinzig. “In a time of increasing uncertainty, it is becoming more and more important to have fixed points in life. Being aware of this is the key to finding the right balance.”

An electrified blast from your speakers, the song sears the mundane and causes a cataclysmic soundscape you’ll find yourself cranking the volume for.

The German bass player with a desire to walk the line solo, Kinzig assembled the Joe’s Groove Huddle project in 2020 as an answer to penning his own tracks from a distance with other musicians during the pandemic. The result is a hellfire entry into rock and roll; think synth-infused rock anthems, a fist-bump to Maiden, a nod to Ghost, a bow to Rammstein, and beyond.

“The name ‘Joe’s Groove Huddle’ really describes this very special setup with changing line-ups and the only fixed artist in the band – me,” says Kinzig. “The name stands for the philosophy of the band: Friends having fun with good music.”

Kinzig led the charge on his newly minted musical masterpiece with the release of “Good Day” in February 2021, followed by “Shot From Behind,” In his swirling kaleidoscope of ever-changing musicians, the singles were recorded by his former bandmates Uwe Flatter and Jochen Stien of Killjoy. Keys were supplied by Torsten Lehnert and drums by Christian Fier, both from the current bands of Kinzig. On the latter, Eckhard Koch contributed the backing vocals.

Now with the debut of “Strong,” Kinzig has spun the musical wheel on participants, adding an international flair to the lineup. “The vocals of ‘Strong’ were sung by Eric Castiglia (Italy) and the rap part in the chorus was performed by Daniel Picknell (England),” he explains. “The guitars were recorded by my current bandmate, Benedikt Staud, and the drums were again played by Christian Fier.”

As such, the track is an instant rock headbanger in the triad of singles Kinzig has penned and produced, with “Strong” nestling comfortably in the audio storm Kinzig has created. “I wanted to be able to realize my own songs with my personal ideas,” he says. “I wanted to try to produce the songs on my own as well as possible, so I am not only writing the songs, but I also produce and mix them.”

If there is strength in numbers, then accept the invitation to Joe’s Groove Huddle. The group has room for more, and we’re all invited to be “Strong” together.