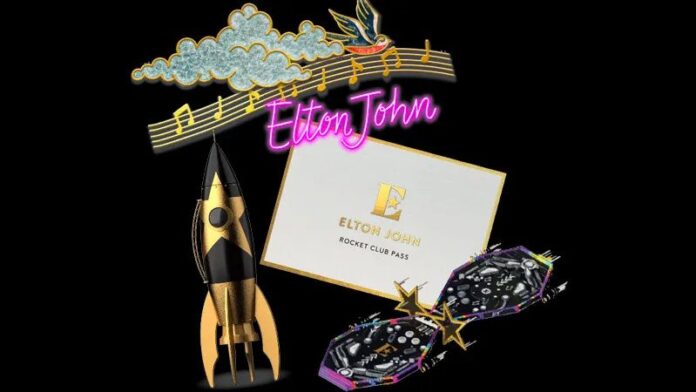 Today, leading into NFT.NYC, global music legend Elton John announces his entrance into web3 by partnering with Jadu and Sweet to auction a one-of-a-kind Rocket Man Jadu Hoverboard NFT in addition to releasing a series of access tokens that give holders the opportunity to unlock a host of future fan experiences as part of the the Rocket NFT Club (nft.eltonjohn.com).

The Jadu Hoverboard auction begins at 10 am ET on Monday June 20 and will close on Wednesday Jun 22, 2022 at 6pm EST with all sales benefitting the Elton John AIDS Foundation (EJAF).

Produced by Jadu, an Augmented Reality (AR) platform that puts web3 avatars at the center of gameplay mapped to the real world, the Rocket Man Hoverboard is the rarest of the 6,666 items within the Jadu Hoverboard collection. Designed by Voxel Bunny, who built Jadu’s iconic jetpacks and hoverboards, the design creatively references a keyboard pinball machine, paying homage to Elton John “Pinball Wizard” Video from 1975, built inside the chassis supported by classic Elton John features including iconic star glasses, piano keys and the actual musical notes from “Rocket Man.”

“As a fellow LGTBQ+ artist, it’s hard to put into words the pride I feel paying tribute to Elton John & his legacy which continues to make a meaningful impact on the lives of so many,” said Voxel Bunny. “And knowing that my creation will play a role in helping to end the AIDS epidemic for the most vulnerable individuals and communities means the world to me,” said Voxel Bunny.

“Whilst I’m no metaverse expert (!) I wanted to make sure that my first NFT was something true to me, and collaborating with LGBTQ+ artist Voxel Bunny and Jadu on something so unique which benefits the Elton John AIDS Foundation for Pride month, was the perfect opportunity.” said Elton John “Web3 has the potential to bring people from across the world together like never before and I’m excited for the opportunities to connect with my fans in a vibrant and growing community.”

“Our team pours its heart into crafting virtual items that are expressive without constraint and allow collectors to develop a new relationship with their physical surroundings,” said Jadu founder and CEO Asad J. Malik. “It’s been a true delight to design our rarest Hoverboard with Elton John’s iconic body of work as an inspiration and we’re honored to play a small role in the Elton John AIDS Foundation fulfilling its mission to end the AIDS epidemic.”

“Elton John has been on the frontline of innovation in music, fashion, and technology for over half a millenia. During his Farewell Yellow Brick Road Tour, the release of these Elton John access tokens combines the innovative web3 world with Elton’s penchant for providing high-value opportunities accessible to his entire fanbase,” said Tom Mizzone, CEO of Sweet. “Together with Elton, we at Sweet look forward to continuing to reveal the additional benefits of the Yellow Brick Roadmap.”

The Elton John AIDS Foundation was established in 1992 and is one of the leading independent AIDS organisations in the world. The Foundation’s mission is simple: an end to the AIDS epidemic. The Elton John AIDS Foundation is committed to overcome the stigma, discrimination and neglect that keeps us from ending AIDS. With the mobilisation of our network of generous supporters and partners, we fund local experts across four continents to challenge discrimination, prevent infections and provide treatment as well as influencing governments to end AIDS. www.eltonjohnaidsfoundation.org