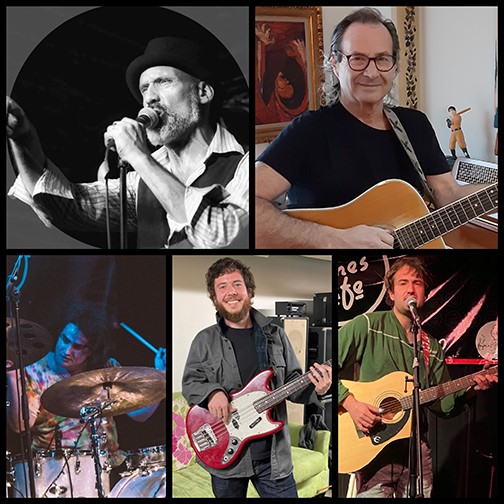 Life can be incredibly difficult just in terms of trying to survive, and children often aren’t blind to their parents’ struggles. In their hopeful-melancholy new single “Just Smile” – available now – Toronto folk-rockers Village Manor explore the routine of the daily grind from both the parents’ and a child’s perspective, and sometimes simultaneously.

With beautiful guitar fingerpicking, piano, and frayed-edges vocals soaked in experience, “Just Smile” is a beautiful, cascading ballad that gives voice to a sleep-deprived, working-class existence. “Well it’s four in the morning, waking up for us/ The stars are still shining as you run to catch the bus/ You’re young but getting older with hard times/ One more dream will make your whole life shine.”

The bills are stacking up, and all the parents can manage each night is a few minutes to read a bedtime story with their child. The next day, the entire routine is repeated all over again. At this point, a representation of the child’s voice comes in – “My book, please read it slowly, and listen to what it says/ It says you think you’re going somewhere, but you’re going nowhere fast.” There’s sadness in both the parents and the child, but there’s also a prompt to enjoy these small moments of togetherness and try to weave them into dreams.

Ultimately, the song contains feelings of both discouragement and hope, and the desire of both the parents and the child to make each other’s lives easier: “And if I can make it happen, I would make your dreams come true/ Just smile, as we wipe the tears away, smile.”

Village Manor wrote the song to spread a message to not take our children’s love for granted. “The child keeps hoping and wishing that the parents will find their dream,” the band explained. “Listen to them and give them the unconditional love and time they so rightly deserve. From the parents’ perspective, they’re sacrificing so much for their love of their children.”

Village Manor started in Toronto in 2018 before founding members Sam Kay and John Weinberg would meet the other bandmates through a series of chance and cosmic encounters. Village Manor acquired singer Dr. Mike Levine, a Veterinarian with Wychwood Veterinarian Hospital — as well as a gifted and amazing singer and stage man — as he was performing with his Tragically Hip tribute band. The group quickly rounded out with the artistic talents of bassist/sound engineer Mike Grundy (Wychwood Sound) and renowned Toronto percussionist Corey Weinberg (Numb Tongues).

Starting as an open mic/cover band, Village Manor tackled important subject matter right out the gate with their debut single “Gunsaway” earlier this year about the prevalence of gun violence in society today. They are currently writing and recording the rest of their debut album.