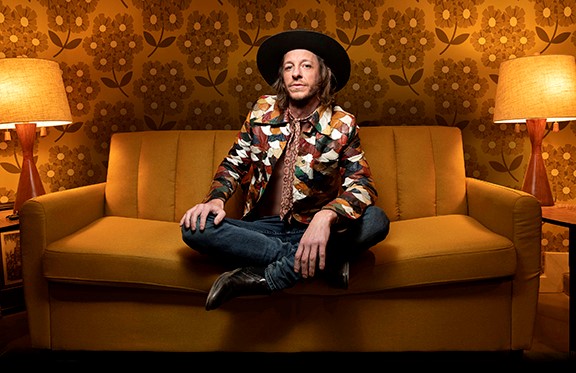 Alternative indie darling Fox Fagan invites you, saying “Let’s Get Lost” with the release of new single — available now! It’s a mystical joyride through disco and modern rock flavouring, sprinkled with a catchy hook and plenty of highs that’ll have you choosing to accept the invite time and again.

The multi-instrumentalist from Portsmouth U.K. turned Los Angeles-transplant hangs it out to dry on his latest offering — escapism that delights and serves in a variety of genres cleverly carved to break the mold while designing a new one. His new solo EP Daydream Mindtones is Fagan’s first completely self-produced collection of tracks with eclectic forays into psych-rock, chamber-pop, and alternative.

The spotlight has now reshifted its focus and is pointing directly to Fagan, who found himself in solace during the pandemic of 2020. The unexpected solitude gave the musician the freedom to write and produce a record that was solely his own; experimenting with his favourite sounds and creating a subgenre all his own.

“At one point I wasn’t sure if I should release this stuff under my name, or start a new artist project and give it a name,” Fagan confides. “One name I had come up with was The Daydream Mindtones. I ended up using that as the name of this first EP. I call it my first because it’s the first one I’ve really created, and produced it all.

“I’ve gone through a lot with these songs and it’s definitely time to let them go and find new homes with whoever is listening.”

His first single off the album, “Gotta Get Out,” was met with praise and covered extensively by reputable music blogs. Now out with “Let’s Get Lost”, fans are noting Fagan’s insatiable synth work and love for disco in the classic Manchester Club fashion.

“Gotta Get Out” would unleash the artistic freedom Fagan was seeking to continue writing songs with an unending creative license. “It led to hitting the guitar a certain way that sounded cool enough and then going to a song with two chords, my one four banger ‘Let’s Get Lost’,” says Fagan, adding: “I was binging disco, chic mostly and wrote a song about wanting to leave, and leave the world and my phone behind.”

What he achieved was a dance-floor anthem; an up-tempo disco meets indie rock soundscape that showcases Fox Fagan’s dedication to good-time vibes with a beat. You’ll find yourself locked in his musical lair. The one with the sign suggesting: “Let’s Get Lost.”