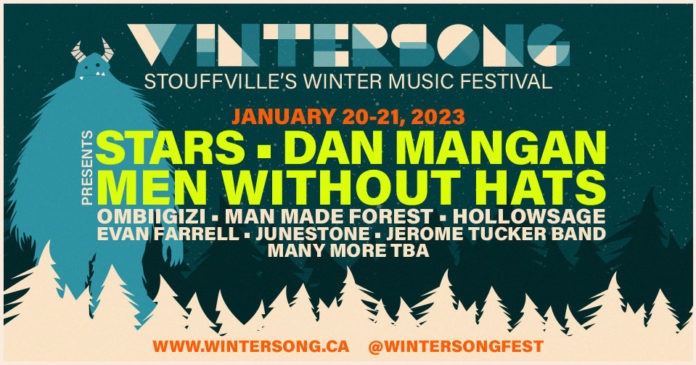 Wintersong Music Festival has officially announced the headliners for their 4th edition, taking place January 20th – 21st, 2023 in Stouffville, ON. The annual festival draws thousands to the local area in the shoulder-season of Winter, giving a much-needed boost to the local economy.

They will be joined by 2022 Polaris shortlisted OMBIIGIZI – a collaboration between Zoon’s Daniel Monkman and Status/Non Status’ Adam Sturgeon; and local indie-folk band Man Made Forest.

Also announced were indie buzz acts Hollowsage, Jerome Tucker Band, Junestone and Stouffville’s own Evan Farrell. They will be joined by 100+ acts, performing across 15+ venues over the two-day event including local restaurants, bars, theatres, cafés and retail spaces.

“Wintersong was the last festival to occur in Stouffville in 2020 and the first to return in 2022 and we’re proud to be back in 2023,” Kevin Ker, from Epidemic Music Group said. “We are incredibly excited to be expanding even more this year. The enthusiasm and excitement from the local and musical communities is encouraging and we’re looking forward to the long-overdue opportunity to gather in celebration of live music and support local businesses after a long, quiet two years.”