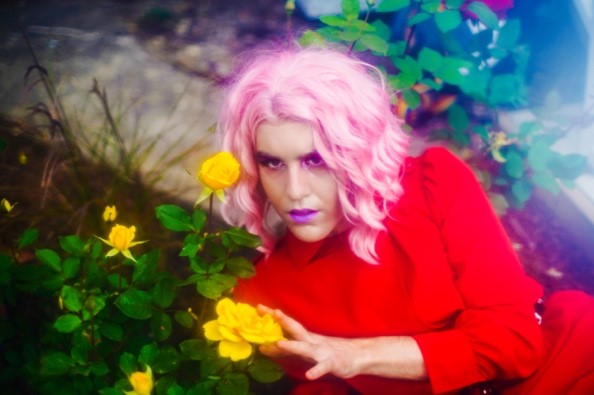 Gender is a construct cobbled together by a multitude of influences over the millennia, but our concept of a deity, or deities, has certainly had a significant impact. Ottawa-based pop artist Lady Charles tackles religion’s influence on gender and the LGBTQ+ community in the lighthearted, dance-heavy banger “Godx.”

Synth-y and steeped in the ’80s in the best possible way, “Godx” boasts a bubbly groove and a fierce-but-whimsical bassline. “I wanted to write a song about gender that touches on issues like how colonialism enforced the gender binary and how LGBTQ+ people have historically been excluded from religious life,” Lady Charles said. “I did not, however, want to create something too serious or overt, and instead wanted to create a silly pop song you could dance to that would still feature those themes beneath the surface.”

With the use of the term “Godx,” Lady Charles imagines a genderless or multi-gendered deity who wears a fabulous bodice of gold and onyx, and has the backs of all people without any trace of the usual judgement:

Get down, the Godx has a plan
And if you don’t know, you’ll find out in the end
The Godx is with you when you sing this song
So worship by dancing and singing along

“Godx,” and the rest of their forthcoming album Manic Pixie Dream World, came about as the result of the pandemic. “The beginning of the pandemic was a reckoning for me, unsure of whether I wanted to continue in music,” they said. “It became clear to me however, that I would need to stop trying to fit in with the masculine rock image that was big in Canada and be unapologetically myself – genderfluid, genre-fluid, and exploring every wild musical and aesthetic tangent that I wanted rather than chasing what I felt others would want.”

A big part of this reckoning came about when Lady Charles posted their song “Manic Pixie Dream Boy” on a discord channel dedicated to ‘90s band of Montreal, and frontperson Kevin Barnes themself responded with enthusiasm. “My idols didn’t hold back, and neither do I now,” Lady Charles said, “and Godx is partly a celebration of that new freedom.”

Lady Charles was even able to recruit producer/engineer/mixer Erin Tonkon, who had worked on David Bowie’s Blackstar, for the project. “Erin told me her musical point of reference for the mix was ‘Of Montreal covering Prince’s ‘Let’s Go Crazy,’ Lady Charles said. “Her mix made the song come alive, making the ’80’s musical references become explicit and sound authentic.”

Lady Charles is a shape-shifting art rock enchanter from Ottawa, Canada. They released their self-titled debut EP in 2020, blending elements of folk, indie rock, and electronica with themes of gender, apocalypse, and loss. Their 2020 single “Manic Pixie Dream Boy” brought their sound and image to a wider audience, racking up thousands of listens and views and setting the stage for a string of unique singles including the cyberpunk prog freakout “Apocalypse Girls” and the kaleidoscopic, pandemic-era love song “Noella.” Buoyed by a vibrant aesthetic, Lady Charles’ blend of art rock sensibilities, glam visuals, and punk rock abandon chart a new course into musical parts unknown.