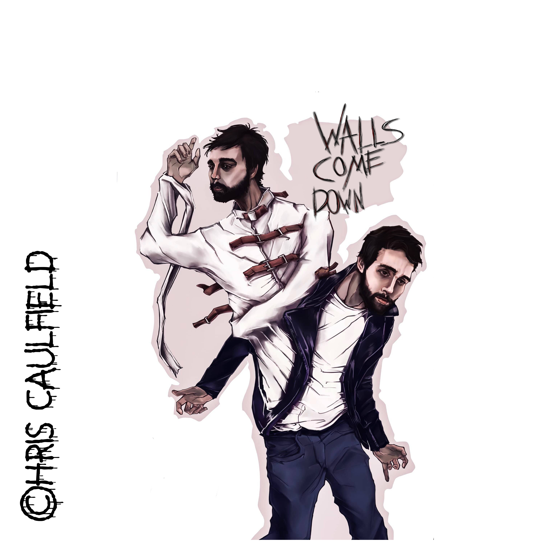 The single chronicles a harrowing conversation between Caulfield and his wife, who sings alongside him on the song. In the Fall and Winter of 2021, the couple experienced a trying strife that tested their 12 years of marriage, but they came out stronger on the other side, creating a contemplative, conversational song that pulls at the heartstrings with the umbra of achingly familiar pain.

“I can remember my wife repeatedly commenting how this wasn’t real, this wasn’t me, nothing was making sense, and in retrospect I of course agree, and it’s part of what made this such an awful stretch, that feeling of not being able to really connect with where you were mentally, emotionally in a moment,” Caulfield reflects.

Caulfield cites 2021 as being the most challenging year of his life. Traversing the sticky web of mental health struggles, chronic pain, and work stress, among other clashes, he was at a record low. “Walls Come Down”, however, marks a turning point for the just-outside-Toronto-based artist, who worked for a year with various production and engineering teams to bring his artistic vision of the song creating a “pensive, dark environment” to fruition.

“I think anyone who has been through something similar, be it an episode with their mental health, or a serious relationship issue/period, can connect with the feelings, emotions, perspectives, etc.,” Caulfield shares.

After a decade-long hiatus, in late 2020, Caulfield dove headfirst back into a craft that proven to be a powerful outlet for him: music. He played in bands around Toronto in his teens and early 20s, but veered away to manage his own businesses and start a family. Struggling with the enduring hardship of the Covid-19 pandemic and numerous conflicts of his own, he found solace in making music, and in March of 2021, released his first projects in over 10 years.

His first three singles, “The Other Way,” “Gripped,” and “Wolves” were followed promptlyby his next release, “Letdown”, which fans were clearly receptive to, garnering 10,000 streams in its first month on Spotify. Caulfield’s perseverance through adversity reflects in his musical tenacity, embarking on numerous projects from working on singles with two European independent record labels to scoring the opportunity to write music for TV and film, and finally, an artist development project on the home front with a Canadian indie label.

With so many projects in the works, Caulfield is one to watch. His unrelenting candor is refreshing in this day and age – Chris Caulfield has a story to tell, and he’s on a mission to share it.