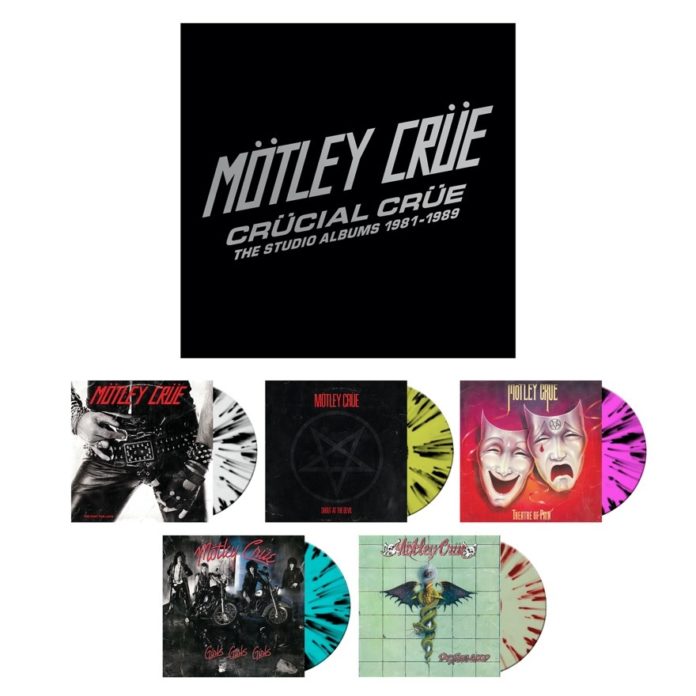 On the heels of MÖTLEY CRÜE’s highly successful THE STADIUM TOUR with Def Leppard and playing to over 1M fans in North American this year, BMG announced today the release of the limited edition box set, Crücial Crüe: The Studio Albums 1981-1989 featuring MÖTLEY CRÜE’s first five platinum selling landmark albums pressed on colored vinyl – ­Too Fast For Love (White/Black Splatter), Shout At The Devil (Yellow/Black Splatter), Theatre Of Pain (Hot Pink Magenta/Black Splatter), Girls, Girls, Girls (Cyan Blue / Black Splatter), and Dr. Feelgood (Coke Bottle Green / Oxblood Splatter) – housed in a solid black slipcase with foil imprint and only available in this box set. The Crücial Crüe box set will also be released on CD with only 10,000 units of each configuration available globally and can be pre-ordered, HERE.

Too Fast For Love (White/Black Splatter)

In 1981 MÖTLEY CRÜE released their platinum selling debut album Too Fast For Love which hit No. 77 on the Billboard 200 and ranks No. 22 on Rolling Stone’s 100 Greatest Metal Albums of All Time list. The album features MÖTLEY CRÜE live staples and fan favorites such as “Live Wire,” “Take Me To The Top” and ”Public Enemy #1.”

Shout At The Devil (Yellow/Black Splatter)

After a highlysuccessful U.S. tour, MÖTLEY CRÜE and DEF LEPPARD will once again reteam for THE WORLD TOUR in 2023, hitting Latin America in February and March, and the U.K. and Europe in May, June, and July.

Side B
Red Hot
Too Young To Fall In Love
Knock ‘Em Dead, Kid
Ten Seconds To Love
Danger

Dr. Feelgood
Side A
T.n.T. (Terror ‘n Tinseltown)
Dr. Feelgood
Slice Of Your Pie
Rattlesnake Shake
Kickstart My Heart
Without You

Side B
Same Ol’ Situation (S.O.S.)
Sticky Sweet
She Goes Down
Don’t Go Away Mad (Just Go Away)
Time For Change

Mötley Crüe have amassed over 5 billion streams across digital platforms and the band has over 8 million followers on social media. Known for their iconic live performances, the band has sold-out countless tours across the globe in front of millions of fans with groundbreaking production highlights such as Tommy Lee’s drum-rollercoaster and Nikki Sixx’s flame-throwing-bass. They pioneered the Las Vegas rock residency with a sold out run in 2012. Mötley Crüe’s hit songs such as “Kickstart My Heart” and “Home Sweet Home” are frequently licensed by major brands such as NASCAR, Dodge, Coldwell Banker, Carl’s Jr. and KIA to name a few and their music can be heard on TV hit shows such as Stranger Things and Cobra Kai amongst many others.

The band’s biography “The Dirt: Confessions of the World’s Most Notorious Rock Band” became a New York Times best-seller in 2001 and has sold over 1 million copies worldwide. Members of the band have authored 4 additional New York Times best-selling books since. In 2019 Netflix premiered “The Dirt” biopic based on the bestselling book which became a global hit movie scoring a 94% positive audience score on Rotten Tomatoes. As a result, Mötley Crüe gained an entire new generation of young fans who discovered the band through the movie and further solidified their iconic status, relevance, and the timelessness of their songwriting.

Mötley Crüe remains a huge global draw 41 years into their career and, in the summer of 2022 co-headlined a nearly sold out North American stadium tour with Def Leppard. The tour is set to travel to the rest of the world in 2023.