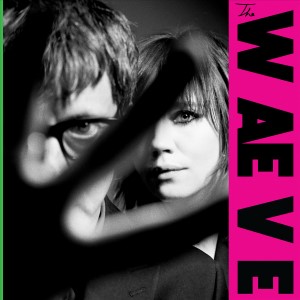 The tide is high. The time is nigh. And The Waeve is rolling in…

The Waeve is a new project featuring the duo of Graham Coxon and Rose Elinor Dougall. A liquid meeting of musical minds and talents. A powerful elixir of cinematic British folk-rock, post-punk, organic songwriting and freefall jamming. The Waeve strikes that magical English folk-rock alchemy of earth and ether. Heaviness and weightlessness. Darkness and light.

The Waeve swelled up after Graham and Rose met backstage at a London venue in late 2020. After exchanging playlists, they found they had plenty of common ground and musical kinships to explore. They began working on material and recording at Graham’s home studio in north London. The ten tracks on their debut album are the results of this intense collaboration, daring each other to write better and probe deeper.

Like a game of consequences, Waeve music is a conversation between two great songwriters getting to know each other during the surreal period of lockdown. Their first explorations opened up a sonic universe neither had expected to find. Initially drawing on a shared love of English folk music, storytelling and the associated landscapes of their beleaguered island, they discovered a shared need to shed themselves of poisons, heartbreaks and defeats through music. From the cocooned conditions of the Covid period, against a brutal global backdrop of impending apocalypse and despair, a body of work emerged, dreaming of escape in a widescreen wilderness. Songs such as the myth-soaked ‘Undine’ are narrated from the duo’s twin perspectives – exploring feminine strength and male vulnerability.

Joining creative forces in The Waeve gave the duo the opportunity to push past their instrumental comfort zones. Many tracks feature Graham on saxophones, the instrument he played in his first ever musical band with Blur’s Damon Albarn back in the 80s. ‘Can I Call You’ starts as a ballad then morphs into a krautrock-style motorik number with a sprawling Coxon guitar solo. ‘All Along’ features Graham on cittern, a medieval folk lute. Rose plays piano and an ARP 2000 modular synth. The heavy weather all over The Waeve recalls the blustery folk rock of Sandy Denny or John & Beverly Martyn, while tracks such as ‘Kill Me Again‘ and ‘Over and Over’ recall the 70s rock of Kevin Ayers or Van der Graaf Generator, almost industrial in places.

Graham Coxon is one of the acknowledged guitar heroes of his generation. His seminal contribution to Blur – as well as his nine solo albums since 1998 – goes without saying. This autumn sees the publication of his autobiography, Verse, Chorus, Monster! on Faber and Faber. Rose Elinor Dougall is a singer songwriter from London who has released three solo albums – the latest being A New Illusion (2019). She has also worked with Mark Ronson and Baxter Dury among others.
The duo play almost all the sounds on the album. Drums were added at James Ford’s home studio, and the Elysian Quartet added string parts at KONK Studios in Muswell Hill.