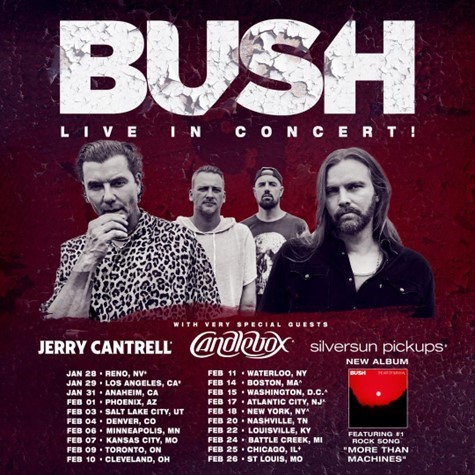 After an incredible summer on this year’s hottest rock concert package with comrades Alice In Chains & Breaking Benjamin that sold close to 400,000 tickets, BUSH announces they are hitting the road again in 2023 in support of their new album, The Art Of Survival. Their must-see US tour kicks off on January 28th in Reno, Nevada, along with some very special guests including Jerry Cantrell, Candlebox, and Silversun Pickups. Full dates below. Tickets on sale Dec 9th at 10am ET and you can find more info HERE.

Singer and guitarist Gavin Rossdale stated: “We’ll always love playing those big summer shows and the big stages, but we wanted to do some shows where we could get close to the die-hard Bush fans again. We’re excited for this run coming up.”

Earlier this year, BUSH’s latest album The Art of Survival ranked in the Top 10 for both Hard Music and Alternative Albums as well as the Top 20 for Rock albums radio chart. The Art Of Survival received praise from Billboard, Stereogum, Consequence, AllMusic (who gave the album a 4/5 star review) and E! News, who said “BUSH …proved once again that they have no plans to slow down.”