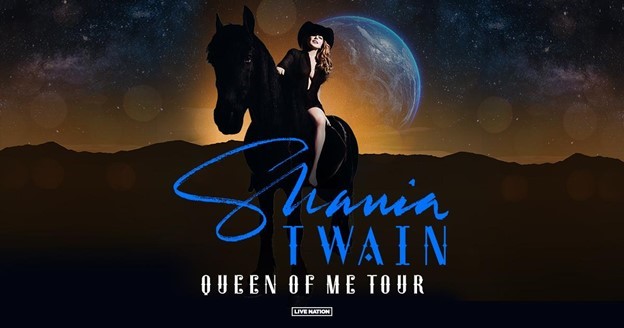 Today, five-time GRAMMY Award-winning legend and the best-selling female artist in country music history Shania Twain announced the second leg of her 2023 Queen of Me Tour. Due to phenomenal demand following the wildly successful announcement of the first leg, Shania is adding 19 new fall dates to her highly anticipated tour in support of Shania’s forthcoming album Queen of Me, out February 3, 2023.

Produced by Live Nation, leg two kicks off on Thursday, October 12th in San Antonio, TX at AT&T Center with stops across North America in Nashville, TN, Toronto, ON, Buffalo, NY, Edmonton, AB and more before wrapping up on Tuesday, November 14th at Rogers Arena in Vancouver, BC. Full routing for both legs of the tour is available below.

The Queen of Me Tour marks one of Shania Twain’s biggest tours to date with over 70 dates taking place across North America and Europe next year. This is also her first tour in nearly five years, following a highly successful residency run in Las Vegas.

Shania and Live Nation have announced that $1 of every ticket purchased to Shania’s “Queen Of Me” Tour will be donated to SKC. Established in 2010 by Shania Twain, SKC provides services that promote positive change in children’s lives in times of crises and economic hardship. SKC provides children with one-on-one consultations, academic support and group activities, as well as nutritious snacks and meal programs where needed, all while in the safe, confidence-building environment that is the Shania Kids Can Clubhouse. These children are learning the skills to cope with and overcome family hardships which, in turn, improves their ability to succeed in school. For more information about Shania Kids Can, please visit: www.shaniakidscan.com

This evening, Shania Twain will also receive the Music Icon award at the 2022 People’s Choice Awards. As the top-selling female country pop artist of all time, Twain is being honored for her record-breaking career which has spanned over four decades. With such enormous hits like “That Don’t Impress Me Much” and “Man! I Feel Like a Woman!,” Twain has expertly bridged the gap between country and pop music, leaving an everlasting impact on the music industry and pop culture. The 2022 People’s Choice Awards will air on NBC and E! at 9:00pm ET/6:00pm PT from the Barker Hangar in Santa Monica, CA.

In addition to receiving the award, Twain will take the stage to perform a medley of her greatest hits as well as her new song “Waking Up Dreaming” off her forthcoming sixth album ‘Queen of Me,’ set for release on February 3, 2023 via Republic Records. It will mark her first return to the PCAs stage since 2005, when she took home the award for Favorite Country Female Singer.