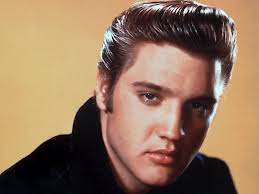 Elvis Presley would have turned 83 today, so here are 83 fun facts about The King!

2. He also dyed his eyelashes, which caused health problems later in life.

3. Elvis purchased his first guitar when he was just 11 years old. He wanted a rifle, but his mother convinced him to get a guitar instead.

5. The first time Elvis recorded, it was for his mother. He paid $4 to Sun Studio to press two songs — My Happiness and That’s When Your Heartaches Begin.

6. In 1954, Elvis auditioned for a gospel quartet named the Songfellows. They said no.

7. That same year, a local radio DJ played Elvis’ version of That’s All Right. He went on to play it 13 more times that day, but had trouble convincing his audience that Elvis was white.

8. His breakthrough hit was Heartbreak Hotel, released in 1956 – a song inspired by a newspaper article about a local suicide.

9. When performing on TV in 1956, host Milton Berle advised Elvis to perform without his guitar, reportedly saying, “Let ’em see you, son.” Elvis’ gyrating hips caused outrage across the U.S. and within days he was nicknamed Elvis the Pelvis.

10. A Florida judge called Elvis “a savage” that same year because he said that his music was “undermining the youth.” He was subsequently forbidden from shaking his body at a gig, so he waggled his finger instead in protest.

11. He played only five concerts outside the U.S., all on a 3-day tour of Canada in 1957. Many believe that the reason why he never toured abroad again was that his longtime manager, Colonel Tom Parker, was an illegal immigrant from Holland who would have been deported had he applied for a U.S. passport.

12. Elvis had a slight  stutter.

13. Col. Parker is said to have always had an eye for talent and for a quick buck – prior to managing Elvis, Parker reportedly painted sparrows yellow to sell them as canaries.

14. After Elvis’ first TV appearance in 1956, Jackie Gleason said, “The kid has no right behaving like a sex maniac on a national show.”

18. Performing “Are You Lonesome Tonight?” in Las Vegas in 1969, Elvis did one of his frequent lyric changes to amuse himself. Instead of “Do you gaze at your doorstep and picture me there?”, he sang “Do you look at your bald head and wish you had hair?”

20. Elvis’ debut album became the first rock-and-roll album to top the Billboard chart, a position it held for 10 weeks.

21. Cultural historian Gilbert B. Rodman argues that the album’s cover image, “of Elvis having the time of his life on stage with a guitar in his hands played a crucial role in positioning the guitar … as the instrument that best captured the style and spirit of this new music.

22. In 1956, he began his film career with a western, Love Me Tender. His second film, Loving You, featured his parents as audience members. Following his mother’s death in 1957, he never watched the film again. He went on to make a total of 31 movies in his career.

23. In December 1957, Elvis was drafted into the U.S. Army, earning a $78 monthly salary. During his brief two-year stint on active duty, he was unable to access his music-generated income of $400,000.

24. In 1959, while serving overseas in Germany, Elvis (then 24 years old) met his future wife, 14 year-old Priscilla Beaulieu. They were married 8 years later.

26. Research shows that “Elvis” is  one of the most popular passwords for computers.

27. He hated fish and wouldn’t allow Priscilla to eat it at Graceland.

28. Elvis’ first appearance on The Steve Allen Show, on September 9, 1956, was seen by approximately 60 million viewers — a record 82.6 percent of the television audience.

29. Elvis’ 1960 hit “It’s Now or Never” so inspired a prisoner who heard it in jail that he vowed to pursue a career in music upon his release. The artist, Barry White, was then serving a 4-month sentence for stealing tires.

30. Elvis started wearing a chai necklace because his mother, Gladys’ maternal grandmother was Jewish — the reason he added a Star of David on his mother’s gravestone.

31. Elvis and Priscilla’s only daughter, Lisa Marie Presley, was born in 1968. Lisa Marie later married Michael Jackson and actor (and Elvis obsessive) Nicholas Cage. Mr. Cage is reportedly the only person outside of Presley’s immediate family to have ever seen Elvis’ Graceland bedroom.

32. Following his divorce from Priscilla in 1972, Elvis was said to have allowed ‘good-looking girls’ who waited outside Graceland to enter afterhours.

33. In the 1970s, Elvis would start every concert with Also Sprach Zarathustra, a 19th-century Richard Strauss tone poem and the theme of the 1968 movie 2001: A Space Odyssey.

34. Elvis’ popularity faded in the 1960’s with the rise of the Beatles, the Rolling Stones, and others. He successfully relaunched his career with a 1968 television special that came about because Elvis had walked down a busy Los Angeles street and had no one recognize or approach him.

35. He was distantly related to former U.S. Presidents Abraham Lincoln and Jimmy Carter.

36. In the early 1970s, Elvis would impersonate a police officer, driving around with a blue light, flashlight, a billy club and guns, and pulling people over. Instead of tickets, he would hand drivers autographs.

37. Elvis recorded more than 600 songs, but did not write any of them.

38. Last year, Elvis was second in the Forbes list of top-earning dead musicians behind Michael Jackson.

41. Although Elvis’s middle name on his birth certificate was ‘Aron’, his grave has it as ‘Aaron’, which was his own preferred spelling.

42. Elvis had a pet chimp called Scatter, which developed a taste for Scotch and bourbon.

43. It’s not clear where Scatter is buried. Some think the hard-drinking animal died of liver disease; others say he was poisoned by a maid he had bitten.

44. Elvis had a pet turkey. His name was Bowtie.

45. He also owned a basset hound, two great Danes, a chow chow, a Pomeranian, several horses, some donkeys, some peacocks and guinea hens, ducks, chickens, a chimpanzee, a monkey and a mynah bird.

47. St Elvis is a small parish in Pembrokeshire named after the Irish bishop St Ailbe, also known as Elvis of Munster, who died in 528.

48. After receiving a kidnap-assassination threat, Elvis performed with a pistol in each of his boots.

49. The minor planet 17059 Elvis was discovered by Australian astronomer John Broughton in 1999 and named after Elvis Presley.

50. Viewers in the United Kingdom did not see the worldwide Aloha From Hawaii special because the BBC refused to pay the price for the 1972 concert.

51. Elvis’s only TV commercial was for Southern Made Doughnuts in 1954. His only line of dialogue was: You get ’em piping hot after 4am.

52. At the age of 36, Elvis Presley became the youngest recipient of a Grammy Lifetime Achievement Award.

53. His entourage was referred to as the Memphis Mafia. All members wore diamond and gold rings with the letters TCB imprinted which stood for “Take Care of Business.”

54. Despite his huge worldly following, Elvis only performed 5 shows outside the US and all of them were in Canada.

55. Actor Nicolas Cage, who was briefly married to Elvis’s daughter Lisa Marie Presley, was the only person aside from Presley’s immediate family to see the inside of Elvis’s Graceland bedroom.

56. Here’s what Elvis and President Richard Nixon said during their 1970 meeting: “You dress kind of strange, don’t you?” Nixon said, to which Elvis responded, “Well, Mr. President, you got your show, and I got mine.”

57. The meeting was a secret until the Washington Post broke the story a year later.

58. Elvis is the only solo performer to have been inducted into the Rock and Roll, Country, and Gospel Halls of Fame.

60. Approximately 600,000 people visit Elvis’s home, Graceland, each year. Graceland was placed on the National Register of Historic Places in 1991.

62. He was nominated for 14 Grammys and won three, receiving the Grammy Lifetime Achievement Award at age 36.

63. B.B. King recalled that he had known Presley before he was popular, when they both used to frequent Beale Street. By the time he graduated from high school in June 1953, Presley had already singled out music as his future.

64. The first post-death Presley spotting was in Kalamazoo, Mich., where a woman said she saw him in a grocery store and at a Burger King.

65. When first motion picture, Love Me Tender, was released, he was not top billed.

66. The film’s original title — The Reno Brothers — was changed to capitalize on his latest number one record: “Love Me Tender” had hit the top of the charts earlier that month. Elvis would receive top billing on every subsequent film he made.

67. In his first full year at RCA, one of the music industry’s largest companies, Presley had accounted for over 50 percent of the label’s singles sales.

68. When a journalist referred to him as “The King”, Elvis gestured toward Fats Domino, who was taking in the scene at his Las Vegas shows. “No,” Elvis said, “that’s the real king of rock and roll.”

69. Several of Elvis’ family members had been alcoholics, a fate he intended to avoid.

70. In 1971, an affair Elvis had with Joyce Bova resulted—unbeknownst to him—in her pregnancy and an abortion.

72. Between 1977 and 1981, six posthumously released singles by Elvis were top ten country hits.

73. A Junkie XL remix of Presley’s “A Little Less Conversation” (credited as “Elvis Vs JXL”) was used in a Nike advertising campaign during the 2002 FIFA World Cup. It topped the charts in over 20 countries.

74. Elvis holds the records for most songs charting in Billboard’s top 40 and top 100: chart statistician Joel Whitburn calculates the respective totals as 104 and 151.

75. A vast number of recordings have been issued under Presley’s name. The total number of his original master recordings has been variously calculated as 665 and 711.

76. Although some pronounce his surname “PREZ-lee”, Presley himself used the pronunciation of the American South, “PRESS-lee”, as did his family and those who worked with him.

79. Legacy Recordings have planned a yearlong celebration of Presley’s music for modern-day Elvis fans. First up, the singer’s The Complete ’60s Albums Collection Vol. 1 has been released onto iTunes. The set highlights all the LPs Presley recorded between 1960 and 1965 with newly mastered sound for the digital medium.

80. A massive new, 60-disc box set of Elvis Presley’s recordings will come out in the spring. The limited-edition set, Elvis Presley – The Album Collection, compiles 57 albums released between 1956 and 1977, as well as three discs of rarities. It will be available on March 18th, a few days before the 60th anniversary of the release of the King’s debut LP, Elvis Presley.