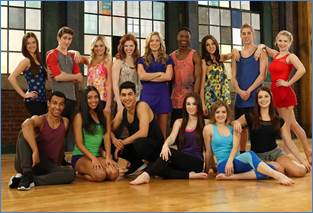 – As the cast of The Next Step prepares to take the stage for the first stop of its sold out national tour, Family Channel is pleased to announce the fan-favourite Canadian original series and recipient of multiple Canadian Screen Award nominations will return for its third season on Monday, March 16 at 7:30 p.m. ET/PT. Leaping back on to the small screen with a special one-hour premiere episode, the compelling dance-drama produced by Temple Street Productions follows the highs and lows of an elite group of dancers as they balance the pressures of competition with the trials of growing up. Following the season premiere, new episodes of The Next Step will air every weekday (Monday – Friday) at 7:30 p.m. ET/PT leading up to the mid-season finale in April.

Season Three of The Next Step premieres on March 16 at 7:30 p.m. ET/PT on Family Channel.

“From the series’ consistent ratings to the sold-out national Live on Stage tour, we are thrilled by the overwhelming demand from our audience to produce anything and everything for The Next Step,” said Michael Goldsmith, Director, Original Programming, DHX Television. “By delivering brand new episodes daily through linear broadcast, next-day SVOD availability and online streaming, we can offer the best possible viewing experience to our fans. And, with so many viewing options available, our viewers won’t have to worry about missing any of the spectacular dances and storylines.”

Season two left off on a cliffhanger with the future of The Next Step – and the A-Troupe’s chance to compete at Internationals – hanging in the balance. After receiving an eviction notice, rival dance academy, Elite, came to the studio with an interesting offer: merge the two studios to create a hybrid team for the International competition. Season three kicks off with the A-Troupe dancers grappling with a tough decision. Can they learn to work with their arch-rivals, or will they risk forfeiting their spot at Internationals?

In advance of the season premiere, fans can relive the A-Troupe’s Nationals win – and get a refresher on the dancers’ most recent dilemmas – with a never-before-seen extended episode of the season two finale on Friday, March 13 at 7:30 p.m. ET/PT. Immediately following the emotional episode viewers will want to stay tuned for a special sneak peek of what’s to come in season three. Beginning March 6, the series will be available in its entirety, for a limited time, on Family OnDemand, which will also offer new episodes as they become available daily starting March 17. Select episodes are available for viewing on Family.ca.

A new season of Next Step also means the return of The Next Step Aftershow, an innovative web series featuring behind-the-scenes footage, interviews with the cast, commentary on the show and much more. Available exclusively at TheNextStep.Family.ca, new episodes will be uploaded after each premiere. The comprehensive supersite also offers the latest information about new and returning characters, original music from the series and fun games like the “Make A Scene” creator and the “Dance Mashup” maker. Fans hoping to add some dance style to their wardrobe can check out Family’s brand new retail destination kt8merch.com/family to get their hands on exclusive merchandise from The Next Step Live on Stage tour, along with other network-inspired products.

Fans can also learn dance moves with their favourite The Next Step stars now that The Dance Academy App has launched with 10 exciting dance routines from five of the dancers. Each lesson is choreographed to music from the show and is broken down into easy-to-learn tutorials, followed by a full routine review and an exciting dance-a-long.

Additionally, several returning cast members will be brought to centre stage with exciting new storylines including Myles Erlick as J-Troupe dancer Noah, along with Devon Michael Brown as Max and Cierra Healey as Cierra, members of Elite Dance Academy. The cast also welcomes newcomer Ella Gilling, a semi-finalist on season two of the United Kingdom’s live-talent television show Got To Dance, in a recurring role.

Commissioned by Family Channel, The Next Step is produced by Temple Street Productions and is executive produced by Frank van Keeken (Wingin’ It, Kids in the Hall, Billable Hours), Ivan Schneeberg and David Fortier (Orphan Black, Being Erica, Wingin’ It). BBC Worldwide has acquired international distribution rights. The Next Step is also produced with the financial assistance from The Shaw Rocket Fund and the Canada Media Fund.