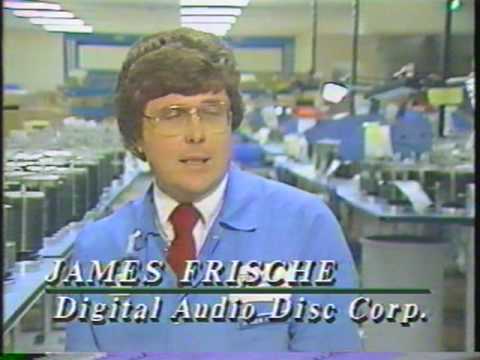 This story is from 1985 and heralds the debut of the compact disc in the US. The host at the beginning of the story is former Detroit NBC Affiliate WDIV anchor Mort Crim, the same newscaster Will Farrell said the inspiration for Ron Burgundy.

Not even the music industry would have ever predicted by 2004, worldwide sales of CD audio, CD-ROM, and CD-R reached about 30 billion discs. By 2007, 200 billion CDs had been sold worldwide.

A few fun facts about the CD:

* The first public demonstration was on the BBC television program Tomorrow’s World in 1981, when the Bee Gees’ album Living Eyes (1981) was played.
* The first commercial compact disc was produced on 17 August 1982. It was a recording from 1979 of Claudio Arrau performing Chopin waltzes (Philips 400 025-2). Arrau was invited to the Langenhagen plant to press the start button.
* The first popular music CD produced at the new factory was The Visitors (1981) by ABBA.
* The first album to be released on CD was Billy Joel’s 52nd Street, which reached the market alongside Sony’s CDP-101 CD player on October 1, 1982 in Japan.
* The first artist to sell a million copies on CD was Dire Straits, with its 1985 album Brothers in Arms.
* The first major artist to have his entire catalogue converted to CD was David Bowie, whose 15 studio albums were made available by RCA Records in February 1985, along with four greatest hits albums.