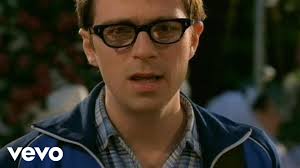 Rivers Cuomo: At 18, I moved to L.A. with my heavy metal band Avant Garde, which was very much influenced by Metallica. At 19, I got a job at Tower Records, and everything started to change very quickly. I started listening to the Velvet Underground, Pixies, early Nirvana, Sonic Youth, and also earlier music like the Beatles. Around that same time, Weezer started. I met them through co-workers at Tower and, one by one, we cut our hair and stopped doing the sweep picking and two-handed tapping. And we came up with The Blue Album.

But if I have to choose one song, it’s gonna have to be “Sliver”, because this other guy I worked with named Howard said, “Rivers, we’re going to play you this song by this new band Nirvana and we think you’re gonna like this.” It was just one of those things where, by the time it got through the first chorus, I was just running around the store. The music turned me on so much. It had the simplicity of the Velvet Underground in the structure and the chords and the lyrical theme—it was talking about family issues from this very innocent perspective. It had the melody and the major chord progression of the pop music I love, like ABBA, but also this sense of destructiveness that I had in me, and it came out in this new hybrid style.

Pitchfork: Did you ever cross paths with Kurt Cobain?
No, not once. When Weezer was making The Blue Album, that was right around the time In Utero came out. He died in April [1994], and The Blue Album came out in May. We were on the same label, and it’s possible he could’ve heard it, but he probably had never even heard the name Weezer. It’s sad for me, because he’s probably my all-time hero, but at the same time, I’m kind of relieved, because he probably would’ve scorned us.