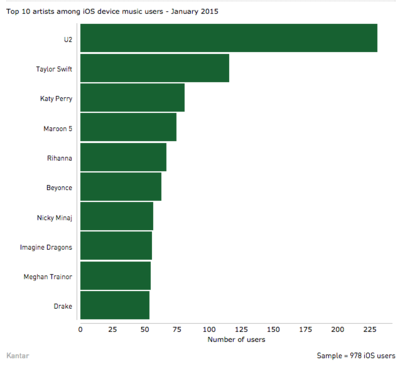 Annoyed as some Apple customers may have been over being “force-fed” U2’s new album last fall, the impact of the free release is still visible five months later. Twenty-three percent of all music users on Apple’s operating system listened to at least one U2 track in January-more than twice the percentage who listened to the second-placing artist, Taylor Swift (11%).

Apple teamed up with the powerhouse rock group to make its latest album, “Songs of Innocence,” available to iOS users for free in the month following the smash debut of the iPhone 6 and 6 Plus. In the face of user complaints about not wanting the album, the amount of memory it consumed, etc., U2 publicly apologized and Apple posted instructions for how to remove the album from a user’s device.

Loud as the complaints may have been, however, Kantar determined that nearly every iOS device user who listened to U2 in January – 95% of them – listened to at least one track from the new album.