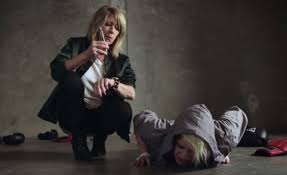 Barnes And Noble Review: In 1990, Sonic Youth decided to sign to a major label. You received a lot of criticism for it — people said you’d “sold out,” a term that seems dated now. How did you feel about it at the time?

Kim Gordon: Well, we may have gone to a major label, but when we went on tour with Neil Young, we learned pretty quickly that we weren’t part of the mainstream – his audiences hated us! And being on a major label didn’t change us. We pretty much continued to do what we wanted to, including a lot of experimental stuff. Geffen never really promoted us, but in return they never pressured us either, or told us we had to go back and edit a song to turn it into something commercial. It was only when we signed with Matador that I realized in some ways that “These are our people,” and not the other guys.

BNR: The term “sellout” seems very ’90s — today, as you write of New York, “creative ideas and personal ambition are no longer mutually exclusive.” That punk-rock puritanism has sort of gone out of style, but have we moved too far in the opposite direction?

KG: I’m of the opinion that individuals need to look into their own souls and figure that out for themselves.

Via Barnes and Noble Review