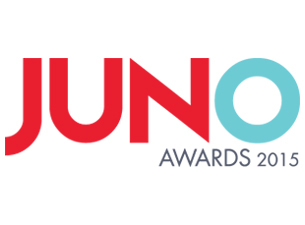 Canada’s music elite gathered to toast 35 JUNO Award winners at the 2015 JUNO Gala Dinner & Awards presented by SiriusXM Canada last night in Hamilton. Hosted by Jessi Cruickshank at the Hamilton Convention Centre, the evening’s festivities featured performances by a spectacular lineup of 2015 JUNO Award nominees and winners, as well as unforgettable tributes to some of the most influential names in Canadian music.

Multiple Award winners at the Gala included alternative singer-songwriter Bahamas, who won honours for both Songwriter of the Year* and Adult Alternative Album of the Year; and electro-dance sensation Kiesza, who earned Dance Recording of the Year and Video of the Year*. Kiesza will also be making her JUNO Award performance debut during the Sunday night Broadcast on CTV from Hamilton’s FirstOntario Centre.

Winners of the 2015 Juno Awards as announced at the Hamilton Convention Centre Saturday, March 14.

International Album of the Year: In the Lonely Hour, Sam Smith

Group of the Year: Arkells

Breakthrough Group of the year: Magic!

Songwriter of the year: Bahamas

Adult Alternative Album of the year: Bahamas is Afie, Bahamas

Jazz Album of the Year, Group: Jane Bunnett and Maqueque

Children’s Album of the Year: Where in the World, Fred Penner

Dance Recording of the Year: Sound of a Woman, Kiesza

R&B/Soul Recording of the year: Often, The Weeknd

Reggae Recording of the Year: Welcome the King, Exco Levi

Roots & Traditional Album of the Year, Group: Let It Lie, The Brothers Landreth

Producer of the Year: Adam Messinger, for “Rude,” by Magic!

Video of the Year: Kiesza, Blayre Ellestad, Rami Afuni and Ljuba Castot, for “Hideaway” by Kiesza

Electronic Album of the Year: Our Love, Caribou

Adult Contemporary Album of the Year: Shine On, Sarah McLachlan