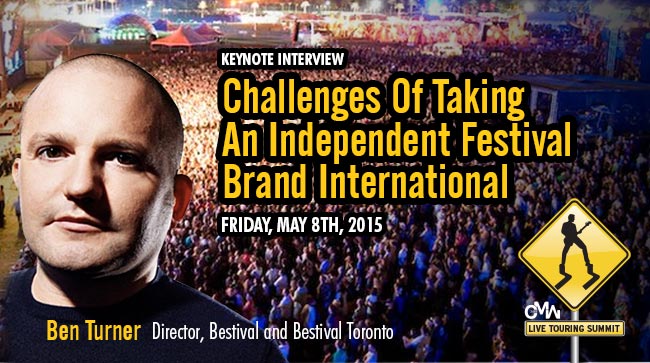 Ben Turner is one of the leading global figures in the fast-growing EDM sector. He is co-founder of the Association of Independent Festivals, co-owner of the Ibiza International Music Summit with Pete Tong, co-founder of the IMS Engage convention, and the owner of UK based management and branding firm Graphite. Turner is also the Director of Bestival and Camp Bestival – an award-winning creative experience from the UK, which is widely heralded as one of the most unique and strongest festival brands worldwide. Additionally, Turner has managed Bestival creator Rob da Bank for nearly 15 years. Most recently Turner brokered a partnership with SFX Entertainment and Embrace in Canada, which will bring the experience to Toronto for its first international event in June 2015. Turner also co-founded AIF (Association for Independent Festivals) with Rob da Bank, in addition to founding AFEM (Association for Electronic Music) – two trade bodies which help address major industry issues for festivals around the world – and is a shareholder in The Physical Network – a visionary global peer-to-peer marketing platform, as well as the manager of highly-regarded Canadian artist Richie Hawtin aka Plastikman.

In this revealing interview during Canadian Music Week, Turner will share his thoughts and insights on the challenges of launching a new independent festival brand internationally, and uncover just what it takes to go up against the well financed giants of the industry.