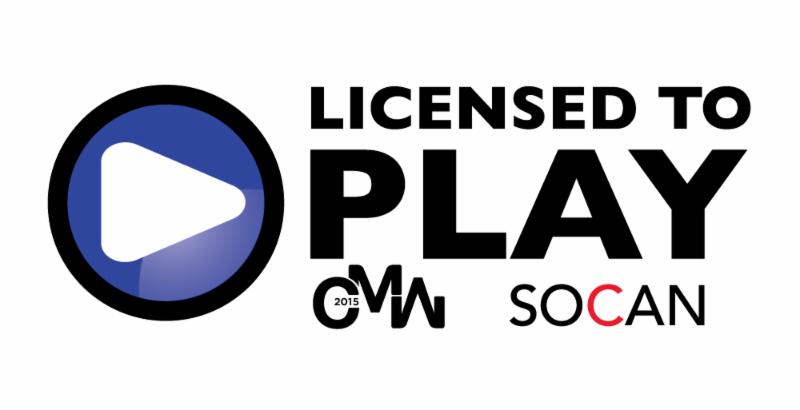 With festival season fast approaching, Canadian Music Week (CMW) and SOCAN have partnered to achieve a first for Canada by awarding the major music conference and festival with a special LICENSED TO PLAY designation.

After confirming that more than 60 CMW music venues are licensed with SOCAN, CMW was presented with a special LICENSED TO PLAY designation from SOCAN – a version of the emblem that nearly 30,000 SOCAN-licensed businesses have so far received to show their support through fair licensing of music created by Canada’s songwriters and composers.

“Partnering with our friends at CMW was something that made perfect sense to us, and it’s our way of continuing to do what is right for music creators and their publishers,” said CEO Eric Baptiste. “CMW being the first festival to be LICENSED TO PLAY is a great accomplishment for Canadian music culture, our members, and the more than 125,000 licensed businesses that are part of music industry ecosystem in Canada.”

Now in its 33rd year, Canadian Music Week is one of the premier entertainment events in North America focusing on the business of music. From May 1st to 10th, Toronto will be buzzing with international and local music-makers and industry representatives from around the world.

“CMW believes in and upholds the rights of music creators to be compensated fairly for their work, so we enthusiastically got together with SOCAN on this industry first,” said CMW President Neill Dixon. “CMW is a significant platform for Canada’s musicians to gain exposure, and we are helping their careers by encouraging our showcase venues to play their part. We encourage other festivals and conferences to follow our lead. It’s the right thing to do for Canada’s music ecosystem.”

This year CMW is showcasing nearly 1,000 acts at more than 60 live venues across Toronto. Ninety-two percent of the Canadian acts performing at this year’s CMW include a SOCAN member.

While organizations that use music as part of their business are expected to abide by the law, constantly monitoring every one of Canada’s music-using businesses is not feasible. SOCAN works with businesses and their trade associations to encourage them to stay up-to-date with their music licenses that collectively are a major part of a songwriter, composer and music publisher’s livelihood through royalties, and a vital aspect of Canada’s music ecosystem.