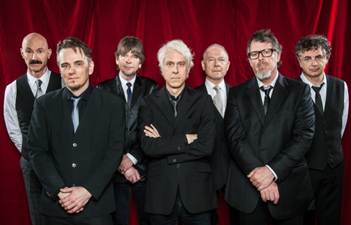 Following their acclaimed tour of America in 2014, King Crimson returns to active service in 2015. With dates for the UK and Europe already in place during August and September, King Crimson are pleased to announce they will be performing a series of concerts in Canada during November.

In his DGM Diary for 6th September 2013, when King Crimson’s return to live performance was announced to an outbreak of media frenzy, fan adoration and spontaneous outpourings of affection, Fripp wrote: At 18.55 King Crimson VIII moved to its next stage of actualization This is a very different reformation to what has gone before: seven players, four English and three American, with three drummers. The Point Of Crim-Seeing was of a conventional Back Line reconfigured as the Front Line, The Seven-Headed Beast of Crim is in Go! mode.