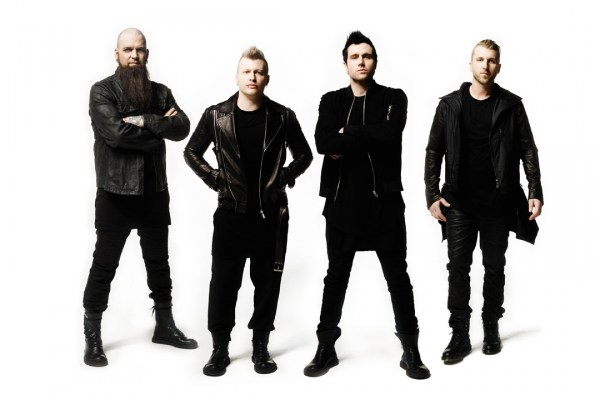 Members of the Official Three Days Grace Community have access to exclusive pre-sale tickets here starting June 2nd at 10am local time. Fans can join the community for free here.

Since first catapulting on to the scene in 2003, Three Days Grace consistently connected to audiences via hard-hitting, honest, and hypnotic anthems. Matt Walst [lead vocals], Barry Stock [lead guitar], Brad Walst [bass], and Neil Sanderson [drums, percussion, keyboards, programming]—once again continue that tradition on their fifth full-length album, HUMAN [RCA Records]. Their link to listeners is the most natural and human thing of all.

“When Matt joined the band last year, there was not a fleeting moment that we didn’t think we would forge ahead,” agrees Neil. “Life is all about chapters. Matt’s first show was in front of eight-thousand people on a co-headliner with Shinedown, and he came out guns blazing. He brought this fiery new energy to the band. We never looked back.”

“We didn’t give him a choice,” smiles Barry. “We hijacked him.”

With Matt as their new lead singer, the band continued barreling forward full steam ahead. In between touring throughout 2014, they reconnected with producer Gavin Brown who helmed the boards on their platinum-certified 2003 self-titled debut and enlisted the mixing talents of Chris Lord-Alge and Nick Raskulinecz. For the first time, Three Days Grace cut songs during short breaks from the road. They would retreat to a dark, uncomfortable rehearsal space and write everything on acoustic guitars, starkly tightening the melodies as much as possible. On HUMAN, Three Days Grace comes full circle, yet they’re also newly energized with the addition of Matt (Brad’s brother). Closing that circle, Matt incidentally co-wrote two songs on the band’s debut album, also produced by Gavin Brown. HUMAN debuted at #1 on the U.S. Billboard Hard Music Albums Chart and at #16 on the Billboard Top 200 Albums Chart in the U.S., and debuted at #2 on the Nielsen Soundscan Top 200 Sales Chart in Canada.

The Three Days Grace machine never stops. 2012’s Transit Of Venus earned the #1 spot on US Billboard’s Hard Rock Chart and went Top 5 on the Top 200, in addition to receiving a nomination for “Best Rock Album of the Year” at the Juno Awards. Both Three Days Grace [2003] and One-X [2006] went platinum, while Life Starts Now [2009] reached gold status, bringing the band’s sales to over 6 million in the U.S. alone. Their catalog of number one hits encompasses smashes such as “Chalk Outline,” “The High Road,” “Misery Loves My Company,” “World So Cold,” “Good Life,” “Break,” “Never Too Late,” “Animal I Have Become,” “Pain,” “Just Like You,” and “Home.”