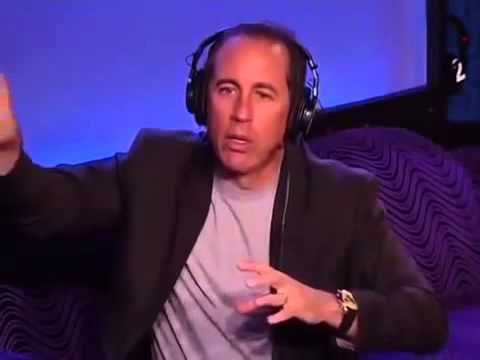 Tonight, I watched the interview of Howard Stern and Jerry Seinfeld again for around the 10th time. Like one of my favourite albums, there’s always something new I catch, and the sense of liberation Jerry has wins out every time. His wonderfully barbed admission are brilliant, and here are the top 10 lines from Jerry.

1. In comedy, the worst thing is when you get comfortable. That’s why success is the enemy of comedy.
2. I had been on The Tonight Show for 9 years. Nobody at NBC, not one person, after 9 years of going on Carson, 3 or 4 times a year, and killing, nobody said, why don’t we talk to this kid? (Howard: Why do you think that is?) Really? Really? (Silence.) Because…Network television companies struggle with the entertainment field. They struggle to create entertainment. It’s a struggle for them.
3. I’m not that big on enjoyment. I don’t think it’s that important. I think what’s important that they enjoy it.
4. On Johnny Carson’s advice: Don’t ever think you know what’s going to happen in this business.
5. The Seinfeld Chronicles didn’t do well for the first 4 years. We had a very high income demo. Horrible ratings, but the people we got were high income. You get rich people to watch your show, you’re going to stay on.
6. Every second of my existence, I’m thinking, can I do something with that?
7. If you’re a comedian and you’re playing golf, you’re going nowhere in this business.
8. When I used to fly in coach, and the stewardess used to close the little thing, and they kinda give you a look in coach like “Maybe if you had worked a little harder, I wouldn’t have to do this.”
9. I think I know why Dennis Miller is doing that (more political comedy). That’s what he wants to do.
10. Your blessing in life is when you find the torture you’re comfortable with.
11. Would I want to be young again? No. If you’re a little lucky in life, you should enjoy getting older. Because you’re going to see more. When you’re young, you can’t see what’s going on so well. You get older, you walk into a room, and you meet this guy and that guy, and you go, Oh, I know exactly what’s going on here.
12. I’m so lost in my own head, I’m not thinking about what other people… “Do people expect you to be funny all the time?” I get that question. What do I know about what people expect? What do I care what people expect? Your expectations are your problem.
13. You can get any moron to talk about themselves, and you’ll kinda find some weird thing about them that is kind of interesting.
14. When you really evolve, you can just do things. Stop talking about it.