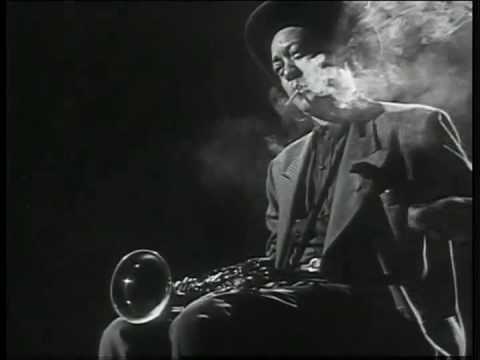 One of the most beautiful jazz films ever made: Jammin’ the Blues, directed by Life magazine photographer Gjon Mili in 1944. This short film features several prominent jazz musicians getting together for a rare filmed jam session, including Lester Young, Red Callender, Harry Edison, Marlowe Morris, Sid Catlett, Barney Kessel, Jo Jones, John Simmons, Illinois Jacquet, Marie Bryant, Archie Savage and Garland Finney. Barney Kessel is the only white musician in the film. He was seated in the shadows to shade his skin.

The movie was directed by Life magazine photographer Gjon Mili, edited by Everett Dodd, with lighting and photography directed by Robert Burks (his first credit in this field), and released by Warner Bros. Producer Gordon Hollingshead was nominated for an Academy Award in the category of Best Short Subject, One-reel.

Working with Harold Eugene Edgerton of MIT, Mili was a pioneer in the use of stroboscopic instruments to capture a sequence of actions in one photograph. Mili did not serve as cinematographer for this film, but Blues uses multiplied images that in many ways recall the multi-image still-frames done with the strobe.

In 1995, Jammin’ the Blues was selected for preservation in the United States National Film Registry by the Library of Congress as being “culturally, historically, or aesthetically significant”.