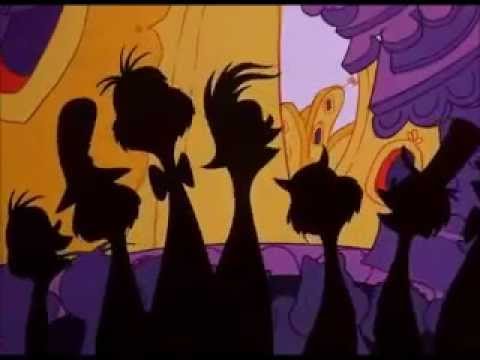 The 1966 cartoon of How The Grinch Stole Christmas was so popular that director Chuck Jones (Looney Toones), followed up with Horton Hears A Who! It aired in 1970 on CBS.

Horton is an elephant splashing in the watering hole of the Jungle of Nool on the fifteenth of May when he hears a person calling for help. The sound is coming from a small dust speck. Dr. H. Hoovey, an astronomer on the speck, believes that there’s a world beyond the speck, but the rest of the Whos don’t believe him at first. He explains to Horton that the speck is in danger if it’s floating around. “A person’s a person, no matter how small,” says Horton as he decides to save the Whos. But the other jungle citizens don’t believe him as they are unable to see them and can’t hear as well. Meanwhile, the citizens of Whoville refuse to believe the existence of Horton, but eventually they do. Jane Kangaroo, the Wickersham brothers,and the Black-Bottomed Eagle are Horton’s main and worst tormentors, but at last, the Whos make themselves heard. At the end of the special, Dr. Hoovey is relaxing in his chair, exhausted from the ordeal, when he sees a small speck of dust and hears a “Help!” on it, and says the final line: “Oh, no!”