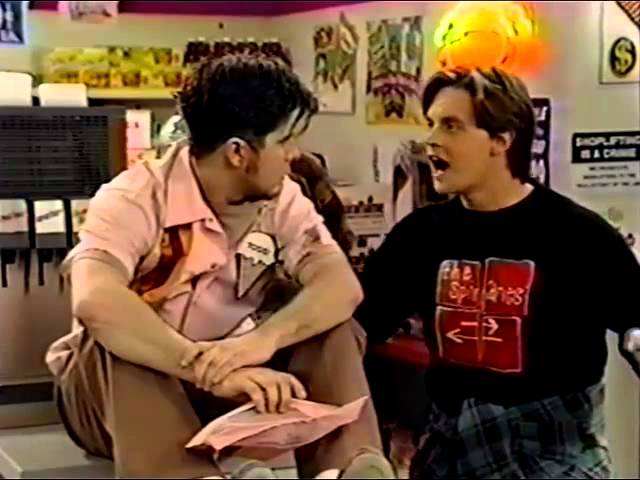 Clerks is a 1994 American black-and-white comedy film written and directed by Kevin Smith, who also appears in the film as Silent Bob. Starring Brian O’Halloran as Dante Hicks and Jeff Anderson as Randal Graves, it presents a day in the lives of two store clerks and their acquaintances. Shot entirely in black and white, Clerks is the first of Smith’s View Askewniverse films, and introduces several recurring characters, notably Jay and Silent Bob. The structure of the movie contains nine scene breaks, signifying the nine rings of hell as in Dante Alighieri’s Divine Comedy, from which the main character, Dante, clearly derives his name.

Clerks was shot for $27,575 in the convenience and video stores where director Kevin Smith worked in real life. Upon its theatrical release, the film grossed over $3 million in theaters, launching Smith’s career.

A pilot for a live-action TV series was produced in 1995. It was produced by Touchstone Television. The pilot only referenced the character names and starred none of the cast from the original film, contained no foul language, and did not feature Silent Bob. The character of Jay was featured, prompting Smith to point out that he owned the character rights to both Jay and Silent Bob (for the purposes of featuring them in separate films). The producers’ solution was to change the character’s name to Ray. Kevin Smith was unaware of the production of the series until casting was underway. Smith had been in production with Mallrats at the time and attempted to become involved in the series but became disheartened quickly as an episode he had written for the series was shot down. He would later use the script for an episode of Clerks: The Animated Series.

The unaired pilot for the attempted 1995 “Clerks” TV pilot. Long thought to have been lost, but recently discovered.