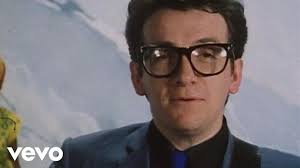 EC: Actually, they’re mostly noted because of the contrast between two of the most famous songwriters that I’ve worked with [Paul McCartney and Burt Bacharach]. So when people refer to the collaborations, they’re usually referring to songwriting collaborations that, as terrific as they were to be in, are—at least in terms of their recorded versions—12 songs apiece. Compared to all the other songs I’ve written, not really a major component in volume. A major component in experience, yes. And I sort of think it overlooks that everything you do, unless you’re going to be a solo folk singer, is a collaboration of a kind. You just don’t put that label on it when you put a band together. And that obviously is a collaboration too.

I didn’t really separate out those songwriting experiences with people that I mentioned from all of the other stuff. They were obviously just very, very unusual experiences, to find yourself across from somebody that you listened to as a child and try to dismiss all of that, really, and just be that person that you were in that moment, and bring everything that you could to it, you know? The collaborations, they’re the kind of experiences that are particularly contrasting to the place I began, being driven by my curiosity about those forms. In the late ’80s, if I was listening more to concert hall music than I was to some sort of rock ’n’ roll club music, then that’s just what I was listening to, and it led me to work with people from that world.

And I had to learn how to communicate. That’s what moved me to learn how to write musical notation. It’s like not being able to spell. Some people can’t spell very well and can still communicate and have beautiful, original ideas. But I had to learn how to do that if I wanted to communicate with those people. It just left me with more possibilities in the way to go after that. I felt like I could write better songs for a rock ’n’ roll combo because I’d had those other adventures. You can turn the electricity off, or you work with people who play violins or different types of instruments or come from a different type of music entirely. And then you pick up the electric guitar again, it’s like it’s brand new.