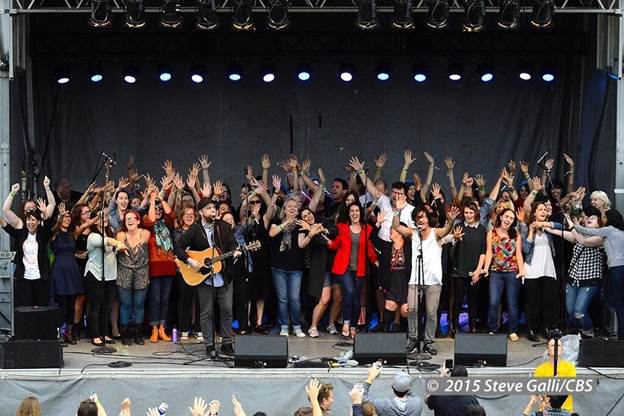 Choir!Choir!Choir! continues to prove that amazing things happen when people come together. The popular singing event is calling out to its expansive community to help bring a Syrian refugee family to safety in Toronto. Founded by Daveed Goldman and Nobu Adilman in 2011, the twice-weekly non-denominational ensemble of inspired singers is banding together to raise the more than $30,000 needed to sponsor a family of Syrian refugees.

In order to help the cause, Choir!Choir!Choir! will be joined by Reuben And The Dark frontman Reuben Bullock at a special fundraising event on December 8 at Clinton’s Tavern as part of its Epic Nights series, which invites musicians to perform in unison with its chorus of over 200 trained and untrained singers alike. Reuben And The Dark will lead the performance of “Imagine” on the 35th anniversary of John Lennon’s death with an original arrangement featuring Choir!Choir!Choir! on backing vocals. As always, everyone in the audience and throughout the city is invited to sing along.

Entry to the special December 8 Epic Night will be a suggested minimum donation of $10 at the door. The public is invited to contribute now to Team Choir!Choir!Choir! via the Ryerson University Lifeline Syria Challenge. 100% of proceeds from the event and all online donations will go directly to a Syrian family seeking refuge in Toronto. Donations are already open and will be accepted throughout the remainder of the year.

“We sing together every week because it makes us feel great,” says Adilman. “We rally behind causes like this because we know how critical a helping hand can be in order to change lives.”

“I think that when it comes to this particular refugee crisis, people feel powerless to help, as the steps to take can seem insurmountable,” says Goldman. “Our hope is that Choir!Choir!Choir! inspires others by showing that making great things happen is possible if you create a strong community and work together.”

Choir!Choir!Choir! has already contributed $10,000 toward its goal, and is looking to its widespread community to raise the rest. $30,000 is the minimum amount needed to sponsor a refugee family. In Toronto, that is barely enough money for an individual to live on let alone a family. All funds raised beyond this goal will be donated directly to the sponsored family or another Syrian refugee family in need.

The Choir!Choir!Choir! singing event series counts over 12,000 community members in its four year history. In addition to performing renditions of popular songs by Blur, Leonard Cohen, Pearl Jam, and many more, Choir!Choir!Choir! has performed with Patti Smith at the Art Gallery Of Ontario, with Tegan & Sara at the JUNO Awards, and recently opened for Jay Leno. Previous Epic Nights have included collaborations with Sloan, Joel Plaskett, Hey Rosetta! and Craig Northey from Odds.

“It’s an honour to be involved in this great cause,” says singer-songwriter Reuben Bullock of joining the Choir. “Tragedy should be something that brings people together. This is the time to show our empathy, compassion, and generosity, and put our political and cultural differences aside.

“‘Imagine’ is a timeless anthem for peace and it couldn’t be more appropriate than right now.”