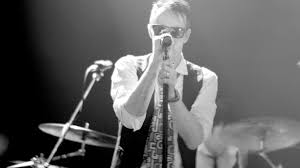 Scott Weiland, best known as the lead singer for Stone Temple Pilots and Velvet Revolver, passed away in his sleep while on a tour stop in Bloomington, Minnesota, with his band The Wildabouts.

According to Billboard, the Bloomington, Minn. Police Department issued a statement at 11:15 p.m. PT detailing the events as such: On Dec. 3rd at 8:22 p.m., officers responded to a report of an unresponsive adult male in a recreational motor vehicle located in the 2200 block of Killebrew Drive. “Officers arrived and determined the adult male was deceased,” read the release, which did not identify the deceased. The address seems to correspond to a local Country Inn & Suites hotel.

Here’s the interview I did earlier this summer:

Two days before being found dead at 48, Scott Weiland gave one of his last interviews backstage at Toronto’s Adelaide Hall.

Neil Portnow, President and CEO of The Recording Academy wrote in a release, “Two-time GRAMMY Award winner Scott Weiland was a grunge icon and a true modern day, rock and roll front man. From the massive success he achieved as the original lead vocalist of Stone Temple Pilots to his work with rock supergroup Velvet Revolver and his most recent venture with the Wildabouts, Scott’s extraordinary talent and captivating performances will forever live on and inspire legions of rock fans worldwide. We have lost an innovative member of our creative community and our sincerest condolences go out to Scott’s family, friends, collaborators and all who have been impacted by his incredible work.”

STP went on to sell 13.5 million albums in the U.S., according to Nielsen Music, while Velvet Revolver sold 2.4 million units.

Craig Kallman, Atlantic Records’ CEO helped the band get signed to his label, and he sent out a letter yesterday to pay tribute to Weiland.

You may have heard the deeply sad news that Scott Weiland, the former lead singer of Stone Temple Pilots, passed away last night at the age of 48. Scott was a force of nature, on record and on stage. One of the most extraordinary vocalists, performers, and songwriters in rock history, he was a charismatic, galvanizing presence with an unmistakable voice and style.

In 1991, the year that I joined Atlantic Records, we signed a band from Southern California called Mighty Joe Young. By the following year, they had changed their name to Stone Temple Pilots, and I watched firsthand as they began a decade of phenomenal creativity and success. We released their debut album, Core, in September of 1992, and STP immediately became America’s biggest new rock band, going on to rank among the most accomplished and influential artists of their generation.

By the time they disbanded in 2002, STP had sold some 35 million albums worldwide, half of those in the U.S. alone. Their songs became rock anthems: “’Sex Type Thing, “ “Plush,” “Creep”, “Interstate Love Song,” and many more. Scott and STP made music that has only become more timeless over the years, sounding as fresh and vital today as the day it was recorded. In 1998, we released Scott’s acclaimed solo album, 12 Bar Blues. STP got back together in 2008, and we released their reunion album in 2010, but unfortunately, it turned out to be Scott’s last work with the band.

Scott was an incredibly creative, warm, intelligent, and inspired human being. His demons have been well publicized, but it is his incredible musical legacy that will be remembered for many years to come. Scott’s passing is a tragic loss for all of those who knew him and for his millions of fans around the world. He will be greatly missed.

The surviving members of Stone Temple Pilots took to Facebook on Friday to post their own tribute to Weiland:

Dear Scott,
Let us start by saying thank you for sharing your life with us.
Together we crafted a legacy of music that has given so many people happiness and great memories.
The memories are many, and they run deep for us.
We know amidst the good and the bad you struggled, time and time again.
It’s what made you who you were.
You were gifted beyond words, Scott.
Part of that gift was part of your curse.
With deep sorrow for you and your family, we are saddened to see you go.
All of our love and respect.
We will miss you brother,
Robert, Eric, Dean

Here’s one of my all-time faves, Slither. May he finally, finally get some rest and peace.