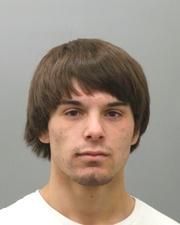 In a struggle between Bud Weisser and Budweiser, the beer company seems to have won.

Bud A. Weisser, 19, received summonses from police Thursday accusing him of first-degree trespassing and resisting arrest after he allegedly entered the Anheuser-Busch brewery property at 9th and Arsenal Streets, where the “King of Beers” is produced.

Police said Weisser abandoned his car after a crash about 6:48 p.m. and hopped the fence into a secure area of the brewery, where he struggled with security officers who had asked him to leave.