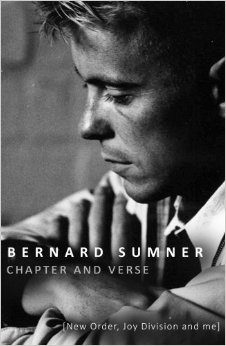 Founding member and guitarist of Joy Division and the lead singer of New Order, Bernard Sumner has been famous over the years for his reticence. Until now. An integral part of the Manchester music scene since the late 1970s, Chapter And Verse is the definitive version of the events that created two of the most influential bands of all time. It’s a welcome trip back in time.

Chapter and Verse includes a vivid and illuminating account of Bernard Sumner’s childhood, the early days of Joy Division, the band’s enormous critical and popular success, and the subsequent tragic death of Ian Curtis. Sumner describes the formation of New Order, takes us behind the scenes at the birth of classics such as “Blue Monday,” and gives his firsthand account of the ecstasy and the agony of the Haçienda days. Sumner is actually better in writing his story, than in interviews, given his time spent thinking his words over.

The Beach Boys’ harmonies were full of warmth and sunshine, Kraftwerk’s groundbreaking electronic pop was suffused with Germany’s post-war economic and technological resurgence while Chic’s music thrummed with the joyous hedonism of late seventies New York.

Sometimes moving, often hilarious, and occasionally completely out of control, this is a tale populated by some of the most colorful and creative characters in music history, such as Ian Curtis, Tony Wilson, Rob Gretton, and Martin Hannett.

He says in The Independent, “I should have called it Private Parts. We’re all private people, but as a musician I think that once you get to the point where there’s more of your life behind you than in front of you, you owe it to your public to explain yourself.”

Sumner is quite honest when it comes to New Order’s past work. “I don’t have fond memories of Movement, and it’s certainly far from my favourite New Order album. I played it once or twice after it was finished and decided I didn’t like it. I felt all the edges had been smoothed off and it was devoid of its own identity and uniqueness. I really missed Ian being there and his absence was something I was very aware of throughout the entire process.”

What I was really looking forward to was his take on his Electronic group, formed with ex-Smith guitarist Johnny Marr. I loved their three records, even handled the PR for the Twisted Tenderness reissue. “Electronic was very much a pressure-release valve for the two of us because we’d both found ourselves in fraught situations. Johnny’s predicament was different from mine in that The Smiths had actually split up, whereas I needed to get a bit of a distance in New Order and myself n order to revive my creative energy and come back stronger to fight another day.”

But it’s one paragraph that stands out, and details what every fan wants to know when their favourite band splits up. What happened? Why? Sumner is bang on the money: “It’s inevitable that you’ll build up little niggles with each other, little things you dislike. If you travel on a bus or a train now, there’ll usually be a kid playing tinny music through his mobile phone, or some business man on his iPhone sitting next to you, until you feel like punching him in the face. In a band, that feeling is multiplied and intensified 24/7. Even if you’re lucky to be in a band were there are no significant egos, the tension inevitably builds up until the whole thing reaches breaking point.”

Sumner is never short of killer melodies – and now stories. Chapter And Verse speaks volumes from one of the great writers of our generation.