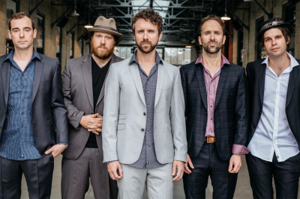 Canadian rockers The Trews are set to showcase their quieter side with an acoustic tour of western Canada and Ontario this coming February and March (see full schedule below).

To coincide with these dates, the band is re-issuing their 2009 live acoustic album Friends & Total Strangers in a deluxe expanded edition, out November 27, 2015 via Home Music Canada / Entertainment One. The remastered set will include four previously unreleased tracks from The Trews’ January 2009 sessions at Glenn Gould Studios in Toronto: “Every Inambition,” “Makin’ Sunshine,” “No Time For Later,” and “Not Ready To Go.” Friends & Total Strangers will also be available on vinyl for the first time, as a double LP (available on tour in 2016) that can be purchased online or at the shows.

Lead guitarist John-Angus MacDonald produced all tracks on Friends & Total Strangers and recent production credits include JUNO nominated album The Union by The Glorious Sons which spawned the #1 single, “The Contender” at Active Rock Radio (Mediabase) this past month.

The Trews have also confirmed that their Feb. 18 and 19 shows at Festival Place in Sherwood Park, Alberta, as well as the Feb. 20 date at Flames Central in Calgary, will include Black Crowes co-founder Rich Robinson as special guest on the bill. John-Angus MacDonald says, “we’re very excited that Rich Robinson will be joining us for those three dates. We are big fans of Rich’s solo work and are thrilled to have him on the bill with us. We did a little collaborating with Rich on the Thank You And I’m Sorry EP a couple years back and it will be great to play with him again.”

“As a band we are really looking forward to these upcoming acoustic dates. There’s been a new album since we last toured acoustically (2014’s The Trews) and we’ve been doing a lot of writing so there’s plenty of new material to draw on when compiling the set lists. It’s always a great way for us to shake things up.”

To date, The Trews have played over 1,000 shows worldwide, on their own as well as supporting the Rolling Stones, KISS, Robert Plant, Guns ‘n Roses, Kid Rock and Bruce Springsteen.