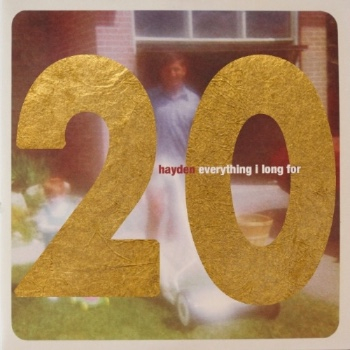 In 1996, an understated clearing of the throat not only kicked off the debut album from Toronto’s Hayden, but announced the arrival of a unique and lasting voice that has continued to resonate in music circles across the globe. With subtlety, simplicity, depth and a haunting quality that is no less affecting 20 years later, to many, Everything I Long For is a classic record. Fittingly, in September, Music Canada awarded the landmark album Certified Gold status in Canada, commemorating the sale of more than 50,000 copies.

On the occasion of its 20th anniversary, Hayden has announced that Everything I Long For will be re-issued as a limited edition remastered vinyl, made available for fans on his own Hardwood Records on April 1, 2016. In addition, he will embark on a solo tour in Ontario, performing much of the album – including material rarely or never previously performed live – as well as songs from throughout his extensive and acclaimed recording career.

“I’ve always had a bit of a complex relationship with this record,” admits Hayden, “but with all of the personal baggage it comes with, I can’t deny the impact it has had on my life and the meaning it had to a certain group of people in the mid 1990s. For that, I’ve made the decision to briefly go back in time and celebrate the first songs I ever wrote.”