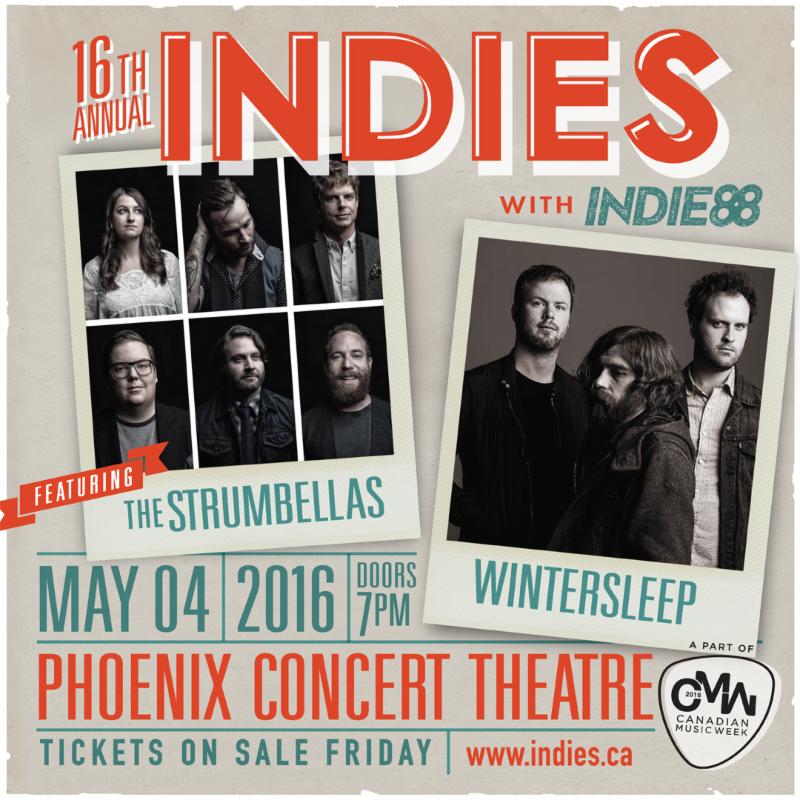 Canadian Music Week Presents The Indies with Indie88 May 4th at The Phoenix Concert Theatre, featuring performances by The Strumbellas and Wintersleep. Now in its 16th year, the Indie Awards are one of Canada’s premier and most anticipated shows honouring the best in independent music. The night will feature 4 full performances and will include award presentations. It’s a celebration of national and international independent musicians making outstanding achievements in this area.

Now in it’s 34th year, Canadian Music Week is recognized as one of the premiere entertainment events in North America focusing on the business of music. The Canadian Music Week festival spans 7 nights of performances, with hundreds of showcasing bands at more than 40 live music venues in downtown Toronto. All convention functions take place at the Sheraton Centre Toronto Hotel, 123 Queen Street West, Toronto.

The #IndiesWithIndie88 Superfriends pre-sale will begin Thursday, March 3rd at 10AM, and offer the first 100 tickets for only $8.81. Public Sale begins Friday, March 4th at 10AM.

Submit your nomination(s!) for a chance to be recognized among industry peers, media and fans alike. Submissions for nominations will be accepted through indies.ca until March 18, 2016. The eligibility period for all awards categories runs from September 1, 2014 through March 1, 2016. Nominees must have been active during the eligibility period and are based on the performance of the group or artist either on record or in live performances