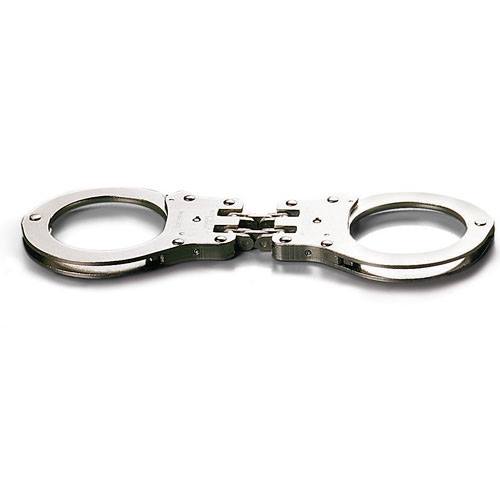 The writer for the Facebook page of the Bangor (Maine) Police Department is a genius. Not only is this person a fine comedy writer, but to make a usual The anonymous outstanding arrest warrant into a hilarious monologue worth reading the entire announcement is worthy of praise. In a regular feature called “Got Warrants?”, this is how you do social media in the police force.

You cannot control the glee that you feel inside when you wake up on Wednesday only to remember that it’s “GotWarrants?” day on the marginally interesting, Bangor Police Department Facebook page.

I do want to give a special shout out to our longtime sponsors at The Peerless Handcuff Company. They don’t pay a cent for this mention but without them, none of this would be possible.

Peerless, home of our favorite model, the 801 C
Made of hi-carbon, nickel-plated steel.
* 22 locking positions
* Includes two keys
* Lifetime warranty
* Double Lock
* 16 oz
“Peerless; When you need to stuff em, you first need to cuff em.” American made since 1914.

Noise Problems and not milkshakes, brought our “boys to the yard” on Willow Street. A loud lady in the hallway caused concerns for other tenants. Each time we showed up, she would hide in a pretty good spot. By the 5th time, we used the skills of stealth and spy power as Officer Farrar observed where the loud and annoying landloper, dawdled off to. She was going out the back and laying low until the law, left. On the fifth trip she was discovered at the neighbor’s house. She was arrested and found to be drunk.

“Disorderly conduct is a mistress that tends to show up with her own six-pack.”
(TC’s Maxim #112)

Bangor’s Maple Street features the type of trees that emit sweet goodness this time of the year. The cold nights and warm days cause the sap to run freely. Boiling it outside makes the wonderful maple syrup that we all treasure on our pancakes and ployes. This was not the sap that were sent there to gather, however. A woman who left jail just hours before, returned to an apartment in defiance of a lawful court order that she not be there. She told the man who was supposed to be there that the judge felt the order was a “joke.” This was not true. She was arrested and taken back to jail. She did not even giggle on the way but found her wardrobe exactly where she had left it.

A hearty, Hi-De-Ho to Todd. We call him Todd because that is his name. Todd made the pizza delivery lady feel very uncomfortable and along with his extremely inappropriate comments, hugged the young lady “not in a good way.” We note that Todd has spurned our advances to discuss this ridiculous and boorish behavior. File this under; we are not laughing and plan on a late night or early morning visit from the summons delivery guy. We do notice that you have been avoiding us and we have some paperwork for you. Your full name is on our contact list and it might be better if you swing by the station and ask for Officer Perry or any officer for that matter. If you do not like being named as a featured player or being called out for being loutish, show some respect to other people. We will see you soon. Toodles…Todd.

Loud and drunken behavior at a local hotel caused the hallway to become the “octagon of obnoxiousness” as two men and two women held a grudge match that began as name calling. Foul and coarse descriptors were hurled about. Words can hurt but pushing and shoving lead to assault charges. The attacker scurried to her room and pulled the blankets over her head pretending we were not knocking. HINT: We really have the ability to knock for a long, long time. No one wants that, so just get up an answer. In the end, one woman was charged with assault and people were sent to their respective corners to continue drinking and to talking badly about one another. The clerk at the hotel made the kind gesture of letting both parties continue to dwell in their rooms. Which, by the way, is where you are supposed to dwell while staying in the fine accommodations that Bangor has to offer.

Finally in today’s episode, we find Officer Hermanson attempting to talk sense into a man at a local nightclub hotspot. The suspect went after another gentleman as Hermanson blocked his pathway to the surefire way of receiving complimentary room and board at the crowbar motel. The man yelled naughty names at Hermanson, some of which might be true, but the man had no way of knowing this for sure. The man told Hermanson that he knew his Miranda rights and as we say, you really should as they are shared approximately 27 times a night in the more popular television programs that all start with the letters N-C-I-S. There is no reason you shouldn’t. Unless you are not a good listener. This was the case as the man refused to stop his yelling and was secured in handcuffs because of his behavior. He also had an active warrant for his arrest. He was taken to jail. His silence became a stronger character trait as his audience disappeared in the rear view mirror of Unit #21..

As always there are three simple rules that tend to act as a “Cop Repellant.”

1.Keep your hands to yourself
2. Leave other people’s things alone
3.Treat one another with kindness

We hope your Wednesday is fantastic and hope that you can help out at least one person today.

If you need help, give us a call. The men and women of the Bangor Police Department will be here.