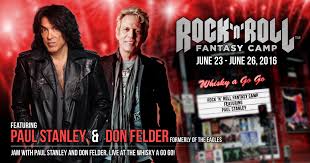 Looking for that amazing summer experience for yourself or your spouse? Rock Camp is the perfect summer experience for anyone who loves music. There is no where else where you can jam live with some of rock and roll’s greatest icons, perform live with them at the legendary Whisky A Go Go in Hollywood CA and spend 4 days with over 20 of the country’s top touring musicians. Rock camp offers packages, master classes, for all skill levels of musicians, from advanced to beginners, plus catering, parties and so much more.

Rock and Roll Fantasy Camp facilities are located minutes from Universal Studios-home of the new Harry Potter ride, the heart of Hollywood’s Walk of Fame, Chinese Theatre and many other attractions. This is the perfect summer getaway for the entire family and a true bucket list experience!

Rock and Roll Fantasy Camp is celebrating it’s 20th Anniversary and is a non-competitive atmosphere.

ROCK ICONS PAUL STANLEY ALONG WITH DON FELDER formerly of THE EAGLES will appear at Rock and Roll Fantasy Camp JUNE 23-26, 2016 and the Metal Gods JUDAS PRIEST will appear August 4-7, 2016 in Hollywood CA.

Over the course of four days, attendees will be placed into bands led by rock star counselors including Rudy Sarzo (Quiet Riot, Whitesnake), Vinny Appice (Dio, Black Sabbath) and many more.

For their attendees, this is a life changing experience. Some of the campers play well and even gave up careers as musicians to become businessmen and women, etc. Some campers can’t play at all. What they have in common is passion for rock music. At Rock ‘n’ Roll Fantasy Camp they all get to pursue their passion – and meet, and play with the artists who became the soundtrack of their lives